The region’s only advanced magnetic resonance imaging (MRI) scanner dedicated exclusively to research is in place at Wright State University and poised for use in human research studies.

The state-of-the-art 3 Tesla MRI scanner promises to pay immediate dividends in neuroscience research — from the effects of high altitude and G-forces on the brain to cognitive enhancement as a way to accelerate and improve learning.

“I just think this is something that is really needed in Dayton to help boost regional research and development infrastructure. It’s so exciting to see it actually arrive and be here,” said Matthew Sherwood, Ph.D., director of Wright State’s Center of Neuroimaging and Neuro-Evaluation of Cognitive Technologies and a research professor in the Department of Neuroscience, Cell Biology and Physiology.

Sherwood said the MRI will help him in his research on hypoxia, a condition in which the brain is deprived of adequate oxygen. It often occurs in high altitudes or in underwater diving and can result in vertigo and tunnel vision and even subpar performance for the following 24 hours.

Sherwood, who has led nearly $3.5 million in projects funded by the Department of Defense while at Wright State, also sees an opportunity to expand the collaboration with the Air Force and researchers at Wright-Patterson Air Force Base in using the scanner.

“We’re hoping they’re able to bring some of their research here,” he said. “We are committed to partnering with them.”

It was a successful collaboration between Wright State, Air Force Research Laboratory’s 711th Human Performance Wing, the Air Force Office of Scientific Research and the State of Ohio that brought the scanner to campus. 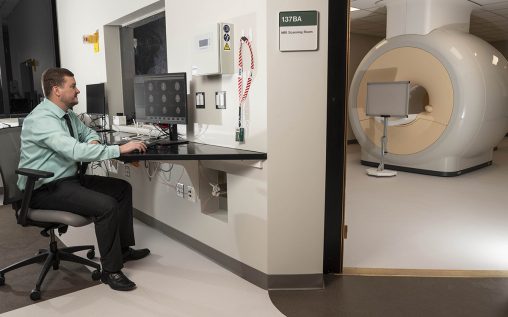 Matthew Sherwood, director of Wright State’s Center of Neuroimaging and Neuro-Evaluation of Cognitive Technologies, says the new MRI scanner could lead to more opportunities for collaboration between Wright State and Wright-Patterson Air Force Base. (Video by Kris Sproles / Photos by Erin Pence)

While the Department of Defense provided a grant for the purchase and installation of the scanner in the summer of 2020, the enormous scanner arrived on Wright State’s Dayton Campus in March 2022.

MRI uses strong magnetic fields and radio waves to create detailed images of the organs and tissues within the body. MRI is considered the gold standard for neuroscience research, as it can provide a highly detailed picture of the brain and its activity in people in real-time.

Sherwood said Wright State already has specialized equipment that can be used with the MRI scanner to study the human brain. For example, a projection system can be placed inside the scanner that flashes images or stimuli and then records the responses of the subjects.

“We’re also interested in high G-forces and how that affects the brain,” said Sherwood. “Is there a potential for neuro inflammation? Does it change how blood flows?”

Those two projects could involve pilots and other Air Force personnel, who would come to the Dayton Campus to participate in the study.

In addition, researchers are interested in cognitive enhancement, looking at how to accelerate and improve learning. That will help the military by shortening training and making it more effective.

“Those projects are going to be key with this state-of-the-art equipment,” said Sherwood.

The grant application for the scanner was written by Sherwood and Assaf Harel, Ph.D., an associate professor of psychology and a cognitive neuroscientist.

Harel’s research focuses on uncovering how people perceive their visual surroundings and particularly how their brains give rise to complex behaviors and skills, including expertise in domains such as navigation, analysis of overhead aerial imagery, controlling multiple unmanned aerial vehicles and flight. 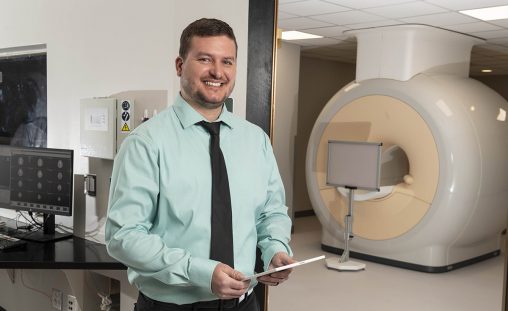 Sherwood said having a research-dedicated MRI scanner means a lot to the local neuroscience community. He said it will likely result in the expansion of neuroscience research at Wright State and possibly attract new talented faculty.