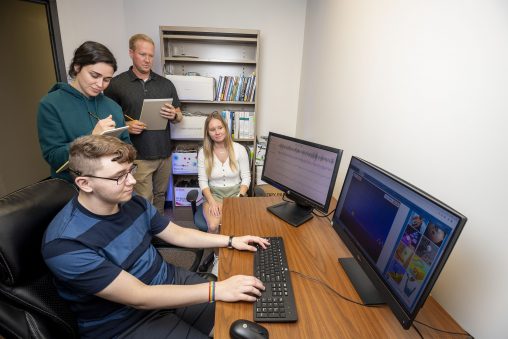 When Josh Ricker, Ph.D., a psychology instructor at Wright State University’s Lake Campus, began to notice a lack of research opportunities for his students, he decided that something needed to be done to correct that deficit.

“We had students applying for graduate school without any experience working in a lab, and that puts them at a disadvantage,” he said.

Last spring, three psychology students Maci Tester, Ashley Dawson and Angelus Haller approached Ricker individually asking if he had any research opportunities for them. He said he was tired of always having to turn students down. So, he got together with them to brainstorm an idea for a research project.

Tester and Dawson were both working in a daycare at the time and were interested in how technology may affect the children they worked with. Their interest was piqued when they started to hear discussion surrounding a popular children’s cartoon and the disrupting effect it had on the children’s attention span as well as overstressing them.

They began discussing practical ways to measure the stress caused by the cartoon.

“We started thinking about using heart rate variability because the equipment was fairly inexpensive and easy to use, but then we got to looking deeper into more advanced technology and found an electroencephalography headband that would work very well for what we wanted to accomplish,” Ricker said.

The team eventually decided that doing the experiment with young children presented too many difficulties and decided to translate it into something that could be done from a lab on campus. They enlisted their fellow students to participate in the experiment and changed the technological stressor from a cartoon to a popular video game.

Student participants were asked to fill out a survey that helped researchers to subjectively determine their current stress levels.

Participants were then instructed to complete the first portion of a cognitive task. From there, they were placed into one of three groups. The control group was simply asked to focus on their breathing. Another group played a video game that featured a lot of changing colors, fast-moving shapes and loud music. The third group was asked to color a complex picture while listening to relaxing music.

Participants in all three groups were then asked to fill out the survey again before attempting to finish the cognitive task they started at the beginning.

The EEG headband was worn by all participants throughout the experiment so that their brain activation could be recorded throughout its different phases. This allowed the researchers to objectively measure the cognitive effects of the technological stimulus.

Haller said that even though their project is on a relatively small scale compared to most experiments, it felt great to get started in the field. He said that he and a graduate student that he connected with, have also been inspired to start a research club for other like-minded students interested in finding ways to collaborate on research projects.

“This research project has given me an opportunity to truly explore whether or not I’d like to pursue research as a career,” Haller said. “It will also give me a step up on my CV compared to other undergrads applying to grad school.”

Ricker said that they are still in the early stages of data analysis, but so far, it is looking like there is no difference in how stressed anyone feels subjectively after any of the treatment conditions, nor is there any difference in scores on the cognitive task. However, they are seeing a trend toward the video game condition leading to higher stress scores in the EEG output.

“That is telling us that even though participants are not reporting feeling any more stressed, their brains are signaling that the technology is having an underlying effect.

Dawson said that she feels she has learned a lot through her participation in the project.

“I’ve learned about the EEG machine as well as many other things about stress caused by overstimulation. I am hoping that this research project will help prepare me for my career field and graduate school,” Dawson said