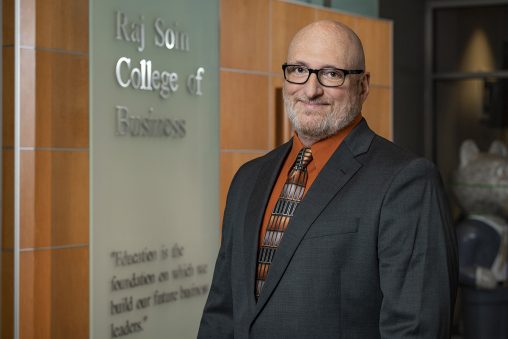 Losing his job because of the pandemic inspired Eric Tomlinson to pursue a degree at Wright State that matched his decades of experience as a supply chain management professional.

Eric Tomlinson’s life has taken many turns on the path that eventually led him to Wright State University. The supply chain management and management information systems dual major said that after 25 years in the supply chain profession, it was time to “match the paper to his experience.”

A married father of four, Tomlinson said that when COVID hit and his job was declared non-essential, he and his wife decided to swap roles.

“My wife is an accountant, and at the time, she had the better job,” he said. “She was deemed an essential employee and I was not. So, we decided I might as well go back to school. The government gave us money. So, we might as well put it to good use.”

Tomlinson also put his time to good use, beginning his education journey at Sinclair Community College, and eventually transferring to Wright State. He said that when he graduated high school at 17, with a full-ride scholarship and ambitions of going into engineering, he wasn’t quite ready.

“I graduated high school with about 50 percent of my associates. I finished that over the summer and then went to a four-year school for engineering,” he said. “I completely wasted that opportunity. I was young. I was smart. I was what they call a rising star, but I was not ready for school. I bounced around trying out different kinds of engineering and eventually dropped out. I remember talking to the dean. He said, ‘come back when you are more mature.’”

After he left college, Tomlinson began working in manufacturing, got married and had a kid.

During his over two-decade career, he worked in many different industries from semiconductors to pharmaceuticals and automotive to aerospace. During that time, he wore many and sometimes multiple hats, learning all aspects of supply chain, such as warehousing, transportation, logistics and sourcing.

He has seen the industry change dramatically over time, becoming more global through the increased use of computers, industry-specific software and technology.

“Nowadays everything is digital. Supply chain is all about getting things to people in the most efficient and cost-effective way possible,” he said. “Early on, supply chain was, I need to call someone. I need to send them an email. I need to go meet somebody at the store. And now it’s much easier.”

Even with all of that experience under his belt, he decided that going back to school was still the right move.

His motivation was threefold. In addition to his desire to get the degree to match his work experience, Tomlinson said it was important for him to never give up on his ambition to achieve personal success in education. He also wanted to set an example for his children so that they would always know that they could go back to school and learn something new.

Tomlinson said that he is glad that he chose Wright State. The technology offered and the ability to take classes online have allowed him to fit his education around his family life.

Although his older children no longer need him as much, his younger kids are still home. The ability to do his homework while they are at school, after they go to bed or even all three of them learning together around the kitchen table was a definite benefit.

One of the main challenges he has faced has been the class schedule times and availability he actually does have to come onto campus, but even that has not deterred him.

“I am fortunate to have a supportive family and great wife to lean on and keep my positive direction and continued progress,” he said. “I believe it is never too late to reinvest in my future.”