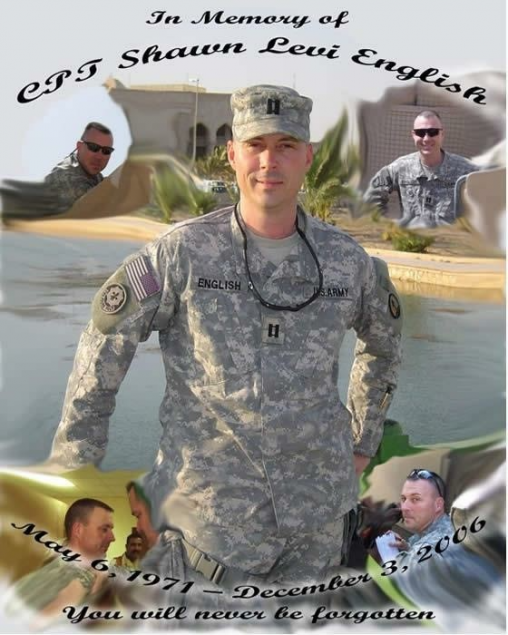 Shawn English was a member of the Army ROTC Raider Battalion and graduated from Wright State with a bachelor’s degree in communication studies in 1999. He was killed in combat in Baghdad, Iraq, in 2006.

Wright State University will dedicate a new garden space on the Dayton Campus in honor of Shawn English, an Army ROTC graduate who was killed in combat in Iraq in 2006.

The Captain Shawn L. English Champion Garden will honor military veterans and those who support them.

Located outside the Veteran and Military Center between Millett Hall and parking lot 10, the Champion Garden will be open to all members of the Wright State community.

The public space will celebrate those who support, or champion, veterans, including other veterans themselves, family members, Wright State staff and faculty and those who work with them, said Seth Gordon, Ph.D., director of Wright State’s Veteran and Military Center (VMC).

“This is going to be a public space to celebrate the student and non-student veterans, active duty and the champions of people who support veterans, which probably is a lot of our students, staff and faculty. It will celebrate people’s family members, their parents and aunts and uncles,” he said. “This will be a place for all of us to honor the community of care that supports our current and former service members”

The VMC is raising funds for the construction and long-term maintenance costs of the garden. The fund drive has a larger goal of creating a permanent endowment to support the Veteran and Military Excellence Fund, which provides flexible and everyday support for student veterans.

Community members can support the Captain Shawn L. English Champion Garden and the VMC by purchasing an inscribed brick or patio paver or an inscribed dog tag that will hang in the garden. Learn more about supporting the project at wright.edu/VMCgarden.

English’s widow, Tricia English, said memorializing Shawn with a garden that is open to everyone is a special honor because his time as a student at Wright State was a poignant time that changed the trajectory of his life.

“It was such an instrumental place that gave him, not the confidence, but the competence that led him to believe that he could be a good officer,” she said. “He knew he had those skills but he needed the education. It was at Wright State where he gained that competence, a belief in himself and self-efficacy.”

Shawn and Tricia married in 1998, and their first son, Nathan, was born while Shawn was a student. Tricia English also graduated from Wright State, earning a bachelor’s degree in psychology. 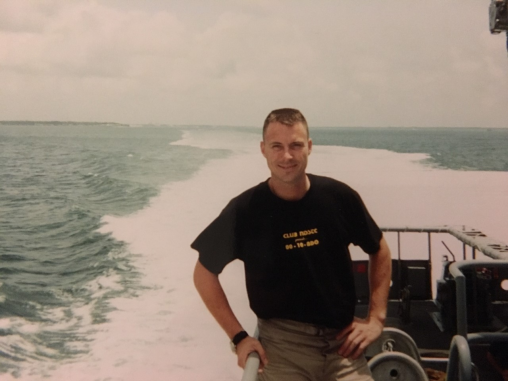 After graduating from Wright State, Shawn English served as an Army dive officer before deploying to Iraq to lead a Military Transition Team that trained and mentored Iraqi infantry soldiers.

For a long time, Tricia said, her husband did not think he could succeed in college and struggled as a student. But he worked hard, earning a bachelor’s degree in communication studies from Wright State in 1999 and a master’s degree from Webster University.

She hopes the Champion Garden sends a message to current and future students who may be struggling not to give up and seek help if they need it.

“My hope is that one of those struggling students who doesn’t think they belong, thinks this isn’t for them, they walk by there and take a seat and they get a little rejuvenation,” said Tricia English, who is a therapist.

Jacob Bashore, a 1999 political science graduate who participated in Army ROTC with English, was one of several Wright State alumni who worked with the Veteran and Military Center to name the Champion Garden after English.

“His story relates to a lot of students who will walk through Wright State’s campus and ultimately sit there in the garden because of who he was, what he had done previously, where he was trying to go, just like a lot of students are on your campus now,” Bashore said.

Born into an unstable family, English spent the first seven years of his life in foster care before he was adopted by Don and Lois English. He grew up on a farm in New Albany, Ohio, raising sheep in 4-H and playing football, basketball and baseball at New Albany High School.

After graduating from high school, he joined the U.S. Army, and, as a cavalry scout with the 2nd Armored Cavalry Regiment, deployed on missions to Honduras, Panama and Iraq during Operation Desert Storm.

After leaving the Army, he enrolled at Wright State and joined the Army ROTC Raider Battalion and participate in the Army’s Green to Gold Program, which provides enlisted soldiers an opportunity to complete a bachelor’s degree and earn a commission as an Army officer.

As an older, more experienced student, English was a mentor to the younger cadets. He had a strong desire to help them develop the tools necessary to successfully lead soldiers when they left Wright State, Bashore said.

“He took a lot of us younger cadets who came to the university right out of high school under his wing to make sure we were getting all the necessary training in leadership or developing the necessary attributes to be successful Army officers,” Bashore said.

English regularly emphasized to the cadets and the soldiers he led his maxim to always “do the harder right over the easier wrong.”

“It was something he always emphasized to all of us,” Bashore said. “Always do the right thing even when nobody is looking, as an Army officer, a leader with integrity and a good citizen.” 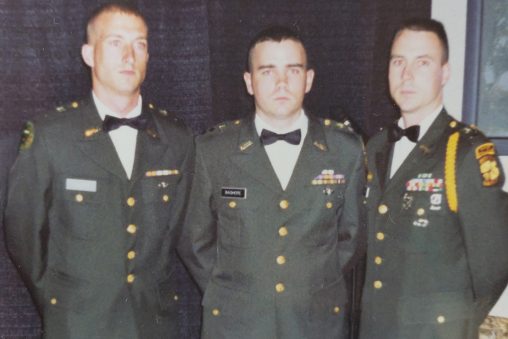 As an older, more experienced student, Shawn English was a mentor to the younger cadets in Wright State’s Army ROTC Raider Battalion and served as the battalion’s training officer during his senior year.

Tricia English described Shawn as a charismatic, natural-born leader who had a big personality and cared about others. Wright State and the Army ROTC program helped him develop his natural abilities to lead, she said.

“By all accounts, he was a tremendous leader, and mostly because he had a huge heart,” she said.

In the 16 years since his death, she said, not a month goes by in which she does not receive a phone call, text or message from someone who tells her they were thinking about Shawn and the impact he had on them.

In 1999, English was commissioned as a second lieutenant in the U.S. Army.

After graduating, he was selected as an Army dive officer, serving as the 74th Engineer Dive Team platoon leader in Ft. Eustis, Virginia, and later as the 577th Delta Company Army Dive Detachment commander at the Naval Dive and Salvage Training Center in Panama City Beach, Florida.

He was then deployed to Iraq to lead a Military Transition Team with the 577th Engineer Battalion, 1st Engineer Brigade. His team trained and mentored Iraqi infantry soldiers.

English was killed in action while on patrol in Baghdad on Dec. 3, 2006, when an explosively formed penetrator detonated near his Humvee. 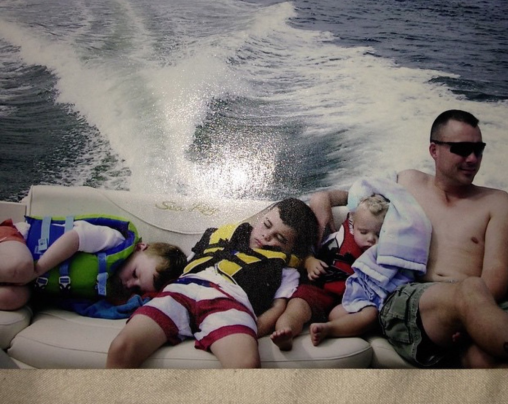 Shawn English with his three sons, Noah, Nathan and Austin.

He was 35. In addition to Tricia, he was survived by three sons, Nathan, Noah and Austin. English was awarded the Purple Heart and Bronze Star Service Medals for his sacrifice.

Measuring nearly 60 feet long and 20 feet wide, the Champion Garden will feature plenty of comfortable patio seating and a large pergola. The entrance will include a walkway of more than 450 bricks engraved with supporters’ names. The other end of the space will include large engraved granite pavers, a retaining wall and flagpoles flying the American flag, the State of Ohio flag and the POW flag.