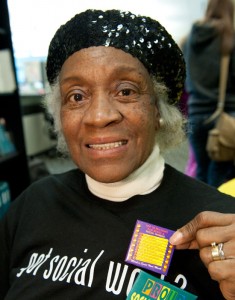 Clad in buttons as if she were working for a political campaign, Gladys Turner Finney wears one button more proudly than most this time of year.

“It’s the ‘March is Social Work Month’ button,” said Turner Finney. “I am in campaign mode, I really am.”

Turner Finney may be retired from her 38-year career in medical and mental health social work, including a stint as an adjunct professor at Wright State in the ’70s, but if you bump into her today you’ll find she’s still engaged.

“I’m someone who loves social work! I love the profession. Because I had success, I am supportive of young people who want to work in social work,” said Turner Finney.

Today’s stop on the campaign trail: Oelman Hall for a visit with a young woman Turner Finney believes is a rising star in the field.

“I’m very, very excited because my belief is that Korine Starkey is like I was when I was young and ready to get into social work, trying to make a difference,” said Turner Finney.

Each year since 1998 Turner Finney has recognized a Wright State student who had the same aspirations she did so long ago. 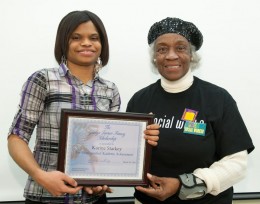 This year Starkey, a senior, will receive the Gladys Turner Finney Scholarship. It’s a $1,000 scholarship presented to an African American social work student who has achieved academically, but is also committed to community service.

“She’s an excellent student, does a very good job with her work. She’s a critical thinker and comes for class prepared, stays engaged and is well liked by her peers and the faculty,” said Carl Brun, Pd.D., chair of the social work program.

Brun said the award is helpful because it comes from outside the program and allows the department to recognize an excellent student who they would not be able to without it.

Starkey has a GPA over 3.5, is a member of the Alpha Delta Mu Social Work Society and one of 11 social work students in the University Partnership Program, which trains students to become child welfare workers.

“I feel very good about it. I’ll take an award any day,” said Starkey.

This year she interned with Montgomery County in the Department of Children Services.

“I’ve seen a lot of different cases, and I’m getting a lot of experience with different populations and issues like neglected children, poverty and addiction,” said Starkey.