On his way to a career in biomedical sciences, Orly Leiva is following a star

Editor’s note: This is the second of four stories in the weekly “Opening Doors” series about Wright State programs that provide laboratory research and training opportunities in the biomedical sciences for students of underrepresented minorities. The programs are directed by the Boonshoft School of Medicine’s Department of Pharmacology and Toxicology. 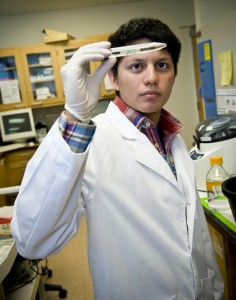 Orly Leiva is in the BioSTAR program, which provides biomedical research experience for undergraduates who are members of underrepresented minorities, disabled or economically disadvantaged.

BioSTAR is shorthand for Biomedical Scholars Training and Research. In BioSTAR, Orly Leiva, a junior, is supplementing his science courses with laboratory training and other activities designed to help him prepare for a career as a professional in the biomedical sciences.

“My ultimate goal is to go to medical school, and I’m strongly considering an M.D.-Ph.D.,” Leiva said. He has had an interest in working with patients, and BioSTAR is revealing to him how much he enjoys the process of discovery. The M.D.-Ph.D. combines both in a dual degree program. “BioSTAR has given me a lot of exposure to biomedical research,” he said.

BioSTAR is one of four funded training programs for students of underrepresented minorities directed by Wright State’s Department of Pharmacology and Toxicology in the Boonshoft School of Medicine. Sponsored by the National Institute of General Medical Sciences, one of the National Institutes of Health, BioSTAR promotes science exposure and career development in the biosciences for undergraduates who are members of underrepresented minorities, disabled or economically disadvantaged. The goal is to get more students from these groups into Ph.D. programs in biomedical and biobehavioral disciplines.

The son of parents from Guatemala, Leiva qualified as an underrepresented minority. He is among the first group of students in the BioSTAR program. Open to qualified juniors and seniors, it offers them mentored research opportunities, academic enhancement courses and enrichment activities that include seminars, journal club, poster presentations, visits to area research facilities and travel to regional and local scientific meetings.

BioSTAR is giving Leiva opportunities that would be difficult to come by on his own. He chose Wright State in part so he could stay close to his family in Miamisburg, where he helps care for autistic brothers.

“I approached Dr. Morris to ask if I could work in her lab. She immediately brought up the BioSTAR program and I applied,” Leiva said. He got further help from Mary Key, M.S., MT(ASCP), who plays a major role as program administrator, recruiter, mentor and student advocate.

Leiva has set high goals for himself. Now a junior, he hopes to take the Medical College Admissions Test (MCAT) in his senior year so he can do directly into a postgraduate program. “I’m trying not to have a gap in school,” he said.

BioSTAR is helping by giving Leiva experience many students don’t receive until graduate school. He said he has a faculty mentor and works side-by-side with graduate students in the lab. He hopes to get his name on a research publication and attend a national scientific meeting.

Leiva said he would have been happy to work in the lab for free just to get the experience, but he doesn’t know how he would have found the time between schoolwork, family and a part-time job. BioSTAR provided a solution because it pays for up to 15 hours of laboratory work per week during the school year and up to 40 hours weekly during the summer.

“I didn’t hope to get paid. It just happened this way and I’m really grateful,” he said. “Before this, I was working in a sandwich shop.”

Next week: STREAMS carries a Wright State student on a voyage to biomedical science.