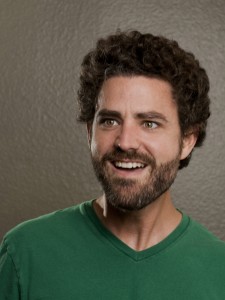 On August 24, Ryan Singer will be hosting Flick My Clip, a comedy shorts festival that will be a part of the FilmDayton Festival.

Armed with a powerful wit and a desire to make people laugh, Ryan Singer has been a success as a comedian since his graduation from Wright State University in 2002 — and that’s no joke!

Singer’s quirky personality and unique sense of humor have won the comedian numerous awards, guest appearances on popular radio shows and acclaim in the comedy world. “Some may call it immature, but I prefer the term ‘childlike,’” Singer said. “I have somehow managed to avoid becoming an adult in so many ways, that it keeps me young inside.”

Rolling Stone magazine recently mentioned Singer as a comedian “Who Should Be Big.” His debut album, How to Get High Without Drugs, was selected by Punchline Magazine as one of the Top 10 Comedy CDs of 2010.

Humbled by the success of his first album, Singer said the praise he received was very unexpected. “Of course, I was proud of my work and thought that I had recorded a pretty good album that was representative of the type of comedian I had become to that point,” he said.

Singer was one of four finalists in CMT’s Next Big Comic contest. He has been heard on XM/Sirius Satellite Radio, has appeared on the nationally syndicated radio show Bob & Tom and was a regional finalist in Comedy Central’s Open Mic Fight. 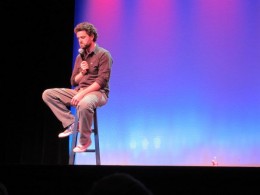 Singer on stage in Aspen, Colorado.

As a kid, Singer found that the best way to get adults to like him was to make them laugh.

“I started becoming focused on getting laughs from people and I guess it kind of became an obsession that stays with me to this day,” he said. “I’m not sure there will ever be a more satisfying laugh than the ones I got as a 10-year-old kid from adults. I keep trying, though.”

Singer attributes much of his success and development as both a person and a comedian to his experiences at Wright State.

Singer graduated with a bachelor’s degree in English with a concentration in creative writing.

“My English classes, specifically my writing classes, helped me find my way through the forest of words as I searched for my voice,” he said.

Singer said that the material assigned became an integral part of his act. The fiction Singer wrote in his classes helped him formulate his stand-up routine.

“In many ways, my classes at Wright State were my first audiences,” Singer said.

Although Singer currently resides in Los Angeles, he holds the southern Ohio region near and dear. Throughout his tour across the country, Singer makes a point to frequently visit the area for a gig. In fact, on August 24, Singer will be hosting Flick My Clip, a comedy shorts festival that will be a part of the FilmDayton Festival. Singer created Flick My Clip as a way to connect the two separate but similar worlds of comedians and filmmakers.

Singer encourages all aspiring comedians and filmmakers to submit their comedy shorts and to participate in the rapidly growing festival. To find out more about the festival and how to participate, visit http://www.flickmyclip.com.

“I wouldn’t be where I am today without my time at Wright State,” said Singer. “That kind of freedom in education, learning to think and expand what is possible, is something I’ll always be thankful for having.”