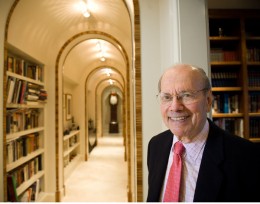 Schuster helped shape the university, particularly its arts programs, through his generous support and patronage.

A clinical professor of medicine at Wright State since 1975, Schuster helped shape the university, particularly its arts programs, through his generous support and patronage.

“When we think of the long list of friends of this university, Dr. Benjamin Schuster is among those at the top,” said Wright State University President David R. Hopkins. “His generosity and wisdom have dramatically impacted three schools and colleges across the campus: the Boonshoft School of Medicine, the School of Professional Psychology and the College of Liberal Arts.”

Schuster and his late wife, Marian, were faithful patrons of the university’s creative arts programs. They attended theatre productions, concerts, dance performances and art exhibitions whenever possible. They served as Host Committee co-chairs of the first ArtsGala, an arts showcase that has raised more than $1.3 million in need-based scholarships for Wright State students majoring in performing and fine arts. The Schusters were a fixture at the annual event, attending each year to support the students.

In an interview for Community magazine, Schuster said, “It was a natural thing to support Wright State’s creative arts. The creative arts elevate the whole spirit of a community. There is an old adage that industry feeds the stomach, but the arts feed the heart and soul.”

In 2009, Schuster made a substantial gift towards the modernization of the university’s Creative Arts Center. His contribution launched a $4.2 million renovation of the building’s concert hall. The state-of-art performance space reopened earlier this year as the Benjamin and Marian Schuster Hall.

“We teach by being a role model in life,” Schuster once said. “If you give with passion, you will receive so much more in return.”

Schuster’s giving didn’t extend to the arts alone. He served the university as secretary of the Foundation Board and as a member of the Academy of Medicine, a community-based service organization dedicated to supporting excellence in medicine through education, research and service.

Involved with the School of Professional Psychology (SOPP) since its founding, Schuster served as a member of the SOPP Community Advisory Board and created the Benjamin and Marian Schuster Scholarship to help clinical psychology students pursue their dreams. He and his wife were both inducted into Wright State’s Robert J. Kegerreis Society to recognize their exemplary philanthropy.

“Perhaps his greatest contribution has been his frequent praise of the mission and values of Wright State to the Miami Valley,” said Charles Taylor, Ph.D., former dean of the College of Liberal Arts. “His recognition of our achievements has led others to recognize the great contributions we are making to this community.”