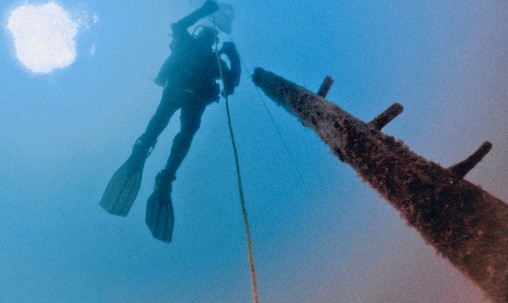 A diver with Great Lakes Exploration Group surveys a beam at the bottom of Lake Michigan that Wright State alumnus Steve Libert believes is from the Griffin.

Steve Libert has spent the last 30 years searching for his Holy Grail: the Griffin, the flagship of French explorer La Salle that sank in the Great Lakes in the 17th century.

After decades of research, thousands of dives, and years of legal wrangling, the Wright State University alumnus thinks he is close to finding the ship.

Last summer, Libert—who along with his wife, Kathie, operates the Great Lakes Exploration Group—led an expedition of divers and archeologists in northern Lake Michigan, where he believes the Griffin sank.

While evidence found during the expedition has so far been inconclusive, Libert is convinced he’s found part of the Griffin.

Libert effuses passion when talking about La Salle, the Griffin, and history. His search is driven by the ship’s place in history and the mystery surrounding its disappearance. It’s why he calls the Griffin the “Holy Grail of the Great Lakes.”

“If you think of the importance of this ship and what it would take to find it—it was the first deck vessel to sink in the Great Lakes,” he said.

Libert’s interest in underwater exploration and shipwrecks isn’t limited to the Griffin. He has consulted on the Titanic, the search for General Tomoyuki Yamashita’s hidden treasure from World War II, and the recovery of the Confederate submarine CSS Hunley.

The Griffin, or Le Griffon as it is called in French, was constructed by René-Robert Cavelier Sieur de La Salle on the Niagara River near Niagara Falls. La Salle and a crew of 32 set out on the Griffin in 1679, sailing through Lakes Erie and Huron, stopping at Washington Island near the entrance to Green Bay on western Lake Michigan. 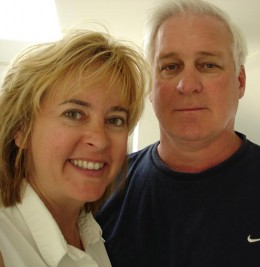 La Salle and most of the crew disembarked and continued south by canoe. He sent the Griffin, with a crew of six and a load of furs, back east for more supplies in September 1679. The ship was never seen again.

Searching for a passage to China and Japan, La Salle eventually sailed the Mississippi, claiming for France much of the Great Lakes region and the Mississippi River basin. A portion of these lands would become part of the Louisiana Purchase.

Noeleen McIlvenna, associate professor of history at Wright State University, said La Salle occupies an important part of the history of both the U.S. and Canada, playing a huge role in creating the lucrative French-Algonquian fur trade from 1666 to 1687.

“His alliances with many groups of American Indians were founded on treating them respectfully as equal business partners,” she said. “Because of his willingness to learn other languages and cultures, Indians helped him map routes and establish trading posts throughout the Great Lakes, around the Midwest, and down the Mississippi to Louisiana. He stands out from the English settlers as a reminder of the potential for a racially tolerant America.”

Libert fondly recalls the day he first learned of La Salle and the Griffin.

He was in eighth-grade history class in Huber Heights, Ohio, near Wright State. His teacher, Mr. Kelly, was lecturing about early European explorations of the New World. Libert was smitten by the tale of the Griffin and La Salle’s adventures in the Great Lakes and down the Mississippi.

As he walked around the classroom, Libert recalled, his teacher put his right hand on Libert’s left shoulder and said, “Who knows? Maybe somebody in this class will find it someday.”

This sparked something in the young Libert. Caught up in the “thrill of adventure,” he grew enthralled with the Griffin. “What kid doesn’t think about a ship and treasure?” he asked.

He initially went to Ohio State to play football, and after injuries cut his playing days short, he left Columbus and enrolled in Wright State. He worked during the day and took classes at night. Libert never lost his adventurous spirit. He learned to fly and to dive underwater.

After graduating from Wright State in 1981 with a B.A. in political science, Libert worked for the Defense Mapping Agency, which today is the National Geospatial Intelligence Agency. He remained at the agency for 25 years as an intelligence analyst until he retired in 2013 so he could focus on the Griffin project. He and Kathie, who graduated from Wright State in 1978 with a B.F.A. in art, moved to northern Michigan. 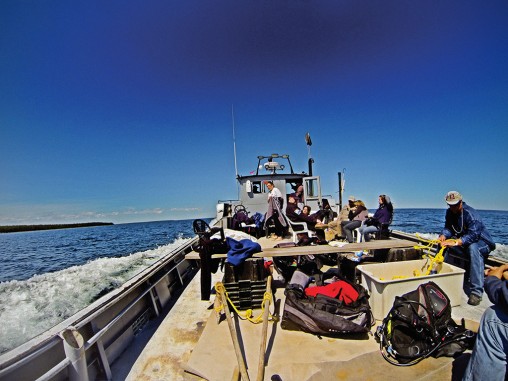 The Great Lakes Exploration Group heading out on Lake Michigan during a diving expedition in June 2013.

He started narrowing in on what he thought was the location of the Griffin as he searched northern Michigan with friends.

After five years, Libert discovered a beam sticking straight out of the bottom of the lake while diving in 2001. “When I found it I knew it was a bowsprit,” he said. “There’s no question about it.”

Furthermore, Libert thought the beam could be the Griffin’s bowsprit, a pole extending from a vessel’s prow.

Years of legal battle ensued between Libert and the state of Michigan about ownership of the find. Eventually, France intervened, claiming that the Griffin belongs to France because King Louis XIV financed La Salle’s explorations.

The parties reached a breakthrough agreement several years ago. It acknowledged France’s ownership of the vessel and gave Libert’s Great Lakes Exploration Group permission to continue inspecting the site.

In June 2013, the exploration group and three French archaeologists spent a week on Lake Michigan examining the beam and searching for the vessel.

Libert had hoped that the ship’s remains would be buried in the mud beneath the bowsprit, but divers who excavated the lake bottom found nothing but sediment and zebra mussels below it.
Libert’s team plans to resume searching northern Lake Michigan in the spring of 2014 to locate the Griffin.

Since it was located, the beam has undergone a number of tests. Carbon testing on wood samples have not pinpointed the exact age of the beam, instead concluding it could be anywhere from 50 to 350 years old. A CT scan was conducted on the timber at a Michigan hospital to try to determine its age by obtaining a tree ring image. Unfortunately, the scan was inconclusive.

The French experts who participated in the expedition conducted an archaeological analysis of the piece. While they could not determine if the beam was part of the Griffin, they said the timber was consistent with a bowsprit from the 17th century. Their report also found that a portion of the artifact had likely been buried “in the sediment of the lake a long time, for at least one hundred years and perhaps even several hundred years.”

Some researchers, including experts with the state of Michigan, dispute that the finding could be from the Griffin, contending that it is instead part of a pound net stake, an underwater fishing apparatus used in the Great Lakes in the 19th and early 20th centuries.

Libert remains convinced the piece is the bowsprit of the Griffin and is encouraged by the French report.

“When you start adding up all the pieces it’s obvious,” he said. “It can only belong to one vessel and that’s the Griffin. No other vessel sailed that area at that time and they didn’t have that kind of construction, at least not documented.”

Visit greatlakesexploration.org to read more about the search for the Griffin.