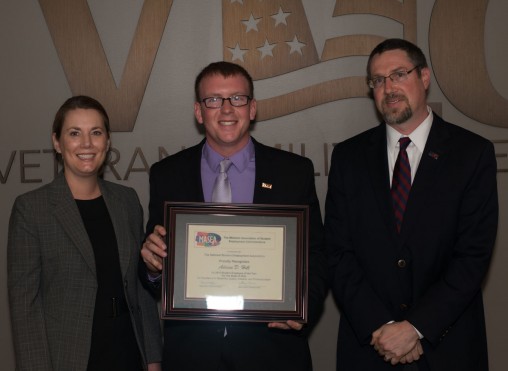 Student veteran Adrian Hill was named the Ohio and Wright State Student Employee of the Year. He is pictured with Kim Gilliam, associate director of Career Services, and Seth Gordon, Veteran and Military Center director.

Adrian Hill, a military veteran who works in the Wright State Veteran and Military Center as a coordinator for the Veterans Voices Project, was honored by university officials as the Ohio Student Employee of the Year.

During an April 13 ceremony at the center, Hill was first honored as Wright State Student Employee of the Year by Kim Gilliam, associate director of Career Services.

Hill was then surprised by Veteran and Military Center Director Seth Gordon to learn that he had also been named the Ohio Student Employee of the Year.

About 2,000 students work on the Wright State campus on any given day.

During a nine-month tour of Afghanistan, Hill saw a 300-pound improvised explosive device flip a British troop truck in his convoy. In just seconds the explosion made it very clear that his Army Reserve company’s mission to locate buried IEDs was as critical as any for U.S. armed forces in the region.

Discipline. Attention to detail. Commitment to service. These were the attributes that would guide Hill’s actions for the duration of his tour. 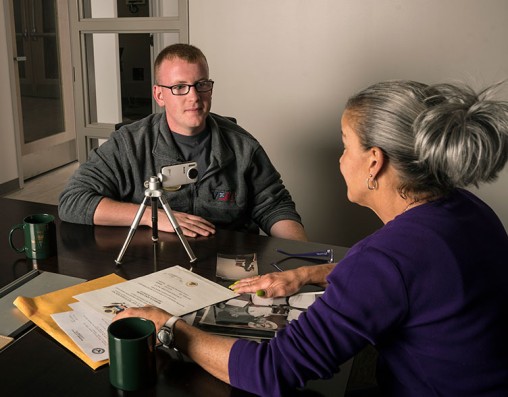 Adrian Hill, a social science education major, works in the Wright State Veteran and Military Center as a coordinator for the Veterans Voices Project, in which students interview older veterans.

Hill said he first discovered the rewarding nature of community service as a Boy Scout in Tipp City. His commitment led to leadership and many community service projects along the way, including an effort to clear a mile-long trail at a nature park in Troy that had been overgrown by honeysuckle and rough terrain.

Hill’s experience in Afghanistan and others like it are critical in chronicling the experiences of veterans, giving them a chance to talk about what they’ve seen, and giving younger veterans a chance to connect with the generations that came before them. That’s the aim of the Veterans Voices Project.

Hill found his current service opportunity by taking it first as a history class where he learned how to interview veterans from the World War II and Vietnam eras on camera. The videos are later given to the Library of Congress but are also used to promote the project.

The Veteran and Military Center is also collaborating with public radio station WYSO to create a series of stories, produced by two Wright State student veterans, on veterans’ experiences transitioning to civilian life.

A social science education major, Hill is the third Wright State student employee to win the state honor in the past three years.

Kris Hyde, a Marine Corps veteran and mechanical engineering student at Wright State’s Lake Campus, won the honor in 2013. In 2012, it was Ashley Leasure, who worked in the School of Music.