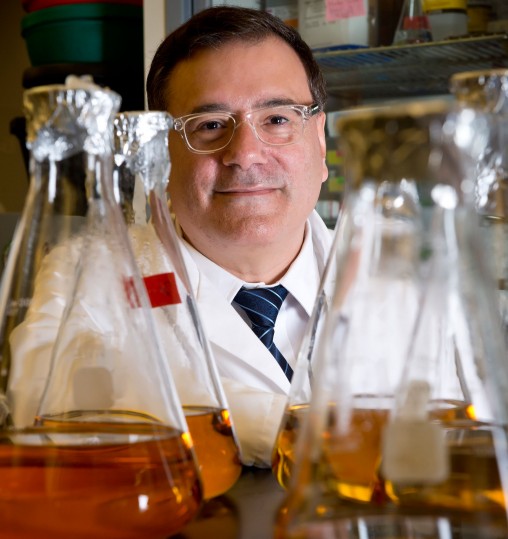 Julian Gomez-Cambronero, biochemistry and molecular biology professor at Wright State’s Boonshoft School of Medicine, will serve as a visiting professor at Harvard as part of a $1.5 million National Institutes of Health grant.

A visiting professorship at Harvard University awaits Wright State University’s acclaimed scientist Julian Gomez-Cambronero as part of a collaboration that promises to advance his research.

Gomez-Cambronero’s appointment at Harvard will run from August through December as part of a $1.5 million National Institutes of Health grant in which he is principal investigator.

“This is a great opportunity to learn at a premier institution and a great tribute to the research work being done at Wright State,” said the biochemistry and molecular biology professor, a Brage Golding Distinguished Professor Award recipient. “It will enable me to answer questions that I have and to explore new avenues in studying human pathology.”

The visiting professorship will enable Gomez-Cambronero to tap into world-class expertise (with Harvard researchers Charles Serhan and Gregory Stahl) as well as models and equipment at Harvard to investigate a technique used in ischemia/reperfusion injury, in which tissue is damaged when blood supply returns to it after a lack of oxygen, and the role of inflammation.

Following treatment for a heart attack, for example, blood rushing back into the organ can result in damage to healthy tissue by activating white blood cells, or leukocytes, that release toxins normally used to fight infection. The damage would be lessened if a way could be found to prevent the infiltration and activation of the leukocytes.

“What I’m going to try to study is the molecular and cellular mechanisms that underlie the movement of these leukocytes to the site of the injury and how we can prevent it, from the molecular point of view,” Gomez-Cambronero said.

And the research findings could potentially be applied to Gomez-Cambronero’s other line of research — cancer metastasis — because both conditions involve cell motility and arrival of cells to places in the body where they are not supposed to be.

“One of my dreams is to start working on that combination,” he said. “It’s a hot topic in cellular biology, the interaction and connection between inflammation and cancer and the infrastructure supporting a tumor — its ‘microenvironment.’”

Gomez-Cambronero and his team recently discovered a key protein that plays a critical role in the development of breast cancer tumors and the spread of the disease to the nearby lungs. The next goal is to find a way to stop the metastasis of cancer cells before they begin to attack new tissues.

At Harvard, Gomez-Cambronero will collaborate with about 20 biochemists, immunologists and physiologists. His office will be in the heart of the Cambridge campus, in the Institute of Research Medicine at Harvard Medical School’s Brigham and Women’s Hospital.

He plans to collect data and publish data he hopes will result in new funding to expand the research. He also intends to take Wright State graduate students in biochemistry and molecular biology to Harvard for brief stints and will explore the possibility of bringing some of the Harvard researchers to Wright State as part of an exchange.

“It may open the door for other Wright State faculty to collaborate with Harvard,” he said.

Gomez-Cambronero also plans to attend weekly Harvard seminars on cutting-edge science, which attract researchers from around the globe.

Since he was hired by the Wright State Boonshoft School of Medicine in 1995, Gomez-Cambronero had built a national and international reputation in medical research.

He has secured more than $6 million in research funding from the National Institutes of Health (NIH), the American Heart Association and other agencies. He has published nearly 100 peer-reviewed publications, presented more than 60 abstracts at various conferences and reviews manuscripts for more than 20 scientific journals and for the NIH, and as such he has been recognized by Harvard as a leading scientist in the field of PLD signaling.

During his professorship at Harvard, Gomez-Cambronero will communicate weekly with his Wright State research team via videoconference to get updates and devise future actions. He also plans to return to Wright State for three weeks in November to teach a Hematology course, for which he is the director, at the Boonshoft School of Medicine.

Any chance of losing Gomez-Cambronero to Harvard permanently?

“I’m very happy at Wright State with all of my research,” he replied.