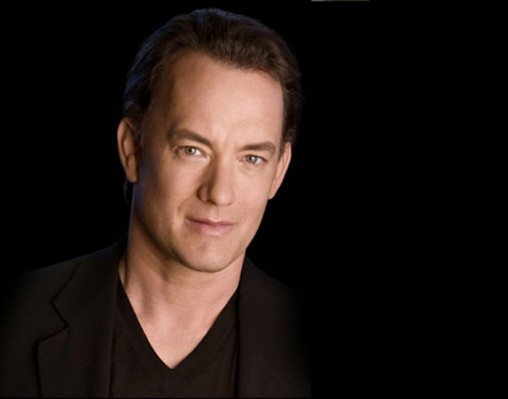 Tom Hanks is scheduled to visit Wright State on April 19 to attend the public dedication of the Tom Hanks Center for Motion Pictures.

Tom Hanks plans to visit Wright State University on April 19 to help dedicate the newly renovated Center for Motion Pictures and celebrate the success of the school’s $150 million fundraising campaign.

He will also take part in several private events, including participating in a dialogue with current theatre, dance and motion picture students.

In addition, Hanks will attend an invitation-only gala at the Wright State Nutter Center. The goal of the gala is to raise $500,000 for the Tom Hanks Scholarship and Visiting Artist Program.

“If I’m a student at Wright State University and the world’s most famous actor and most trusted man comes here, how special are we?” said Wright State President David R. Hopkins. “He chose Wright State to lend his name for motion pictures and forever brand us as his choice of places where people have a chance to be successful.” 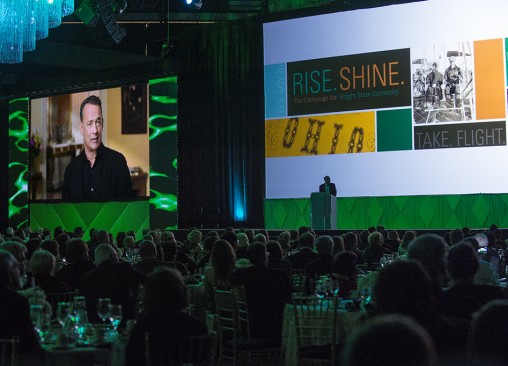 As national co-chair of the Rise. Shine. campaign, Tom Hanks talked about the importance of a Wright State education in a video prepared for the public launch of the campaign. (Photo by Will Jones)

Although Hanks is not a graduate of Wright State, he has a long-running love affair with the university. He has started a scholarship fund at Wright State, produced videos in support of the school and gave countless hours to help the school raise money for its performing arts program.

Rebecca Cole, vice president for advancement and president of the Wright State University Foundation, said Hanks comes from humble beginnings, as do many Wright State students.

“Tom Hanks says he believes in this place because it has the same values that he has,” Cole said. “Tom Hanks is saying Wright State has meaning and purpose. It gives us a credential that nobody else could have given us.”

Hopkins applauded Cole on the success of the fundraising campaign.

“This is a great coup for her,” he said. “She has just done a wonderful job.”

A highlight of Hanks’ visit will be the dedication of the Tom Hanks Center for Motion Pictures.

“Tom Hanks is the most recognized actor in the world,” said Kristin Sobolik, dean of the College of Liberal Arts. “So this is a fantastic opportunity for us, and we are really thrilled that he is lending his name to such a wonderful program.” 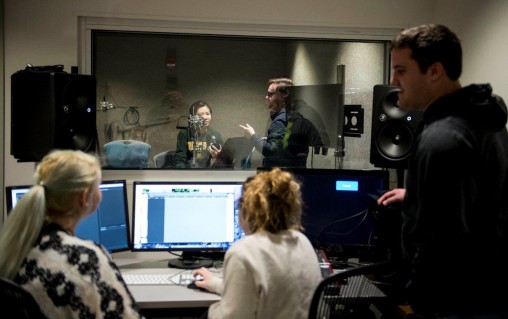 Students in the production studio at the newly renovated Center for Motion Pictures. From left in foreground, E.R. Dickey, Kara Lynch and Nick Kutskill. (Photo by Will Jones)

The Motion Pictures program is now entering its fifth decade and features nationally recognized faculty and alumni who have won Emmys and other high honors. Student-produced films have been screened at major film festivals from Sundance to the Locarno Film Festival in Italy.

Faculty have produced internationally acclaimed documentaries such as “The Last Truck: The Closing of a GM Plant,” nominated for an Academy Award in 2010, and the Emmy Award-winning “Lion in the House,” about young cancer patients and their families.

“It is the most elite and nationally recognized program at Wright State University,” added Sobolik.

In addition to getting hands-on experience in all aspects of filmmaking, students complete a curriculum that is deeply embedded in the liberal arts and strongly rooted in motion pictures history, theory, and criticism. The program also stresses the humanist values of movies — the potential for movies to make the world a better place by sharing the human experience, illustrating courage and showing what people have overcome.

Previously, program offices and classrooms were in the basement of the nearby Creative Arts Center. And there was no production studio, forcing film students to do much of their work in the field.

“All of those great award-winning documentaries and student films were always done out on location, which really had a limiting effect on what the students could do,” Sobolik said.

At 14,500 square feet, the new center is nearly triple the size of the previous space. In addition to a production studio, there are editing suites, a multipurpose classroom, a digital animation lab and even a “green room” that will serve as a lounge as well as a think-tank for students to develop future film projects. The center’s front entrance features the “eyelash,” a sculpture of cylinders that stair-step toward the sky. 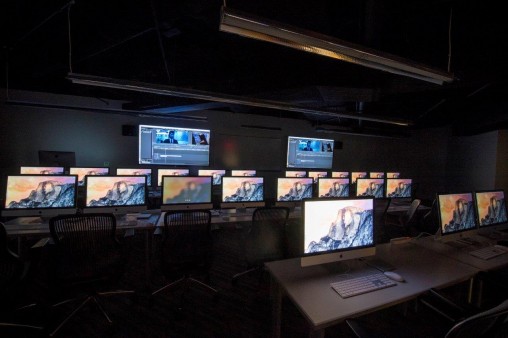 The digital technology lab at the newly renovated Center for Motion Pictures. (Photo by Will Jones)

The new and expanded facilities will enable the program to increase the numbers of majors, giving more students the opportunity to pursue their dream of becoming filmmakers.

“Our students have a high success of employment in the field of motion pictures,” said Sobolik. “They are so highly skilled and our program is so wonderfully recognized that employers often try to pull them out to employment before they graduate. We have a growing number of motion pictures alumni in Hollywood — as well as throughout the state of Ohio, where many new and important films are being made these days.”