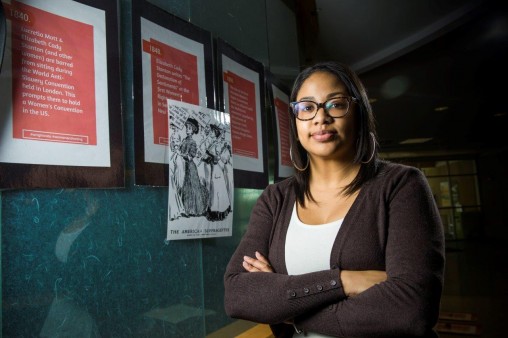 The Wright State Women’s Center and its director, Nicole Carter, created an exhibit in the Millett Hall atrium on the history of women in voting that will be on display until the presidential debate on Sept. 26. (Photo by Erin Pence)

Wright State University hosting the first general election presidential debate may heighten interest in a new campus exhibit that recognizes the historical struggle of women to win the right to vote.

And the exhibit brings attention to the power of women in this election, says Nicole Carter, the director of the Wright State Women’s Center.

“The votes of women are very important in any election, but I feel like they will be significant in this upcoming presidential election and local elections,” said Carter.

Wright State will host the first debate, which is expected to put the university in the national and international spotlight and attract thousands of media members to campus.

In 2012, women made up 53 percent of the electorate in the presidential race.

The Women’s Center has created an exhibit on the history of women in voting that will be on display around campus until the debate on Sept. 26.

The exhibit was installed in the atrium of Millett Hall in March during Women’s History Month. It is part of the Wright Vote Project, a university-wide initiative designed to get students involved in the political process through Election Day.

The exhibit — which features sketches, photos and narratives — showcases the steps that led to women winning the right to vote and related history up to present day.

It includes the entire wording of the 19th Amendment, which prohibits any U.S. citizen from being denied the right to vote on the basis of sex. It was ratified on Aug. 18, 1920.

It also details the history of suffragettes Lucretia Mott and Elizabeth Cody Stanton and displays the “Declaration of Sentiments,” a document seen as launching the women’s rights movement that was signed in 1848 in Seneca Falls, New York, at the first women’s rights convention.

In addition, the exhibit includes the entire “Ain’t I a Woman?” speech in 1851 at the Ohio Women’s Rights Convention in Akron by Sojourner Truth, an African American abolitionist and women’s rights advocate.

Carter hopes the debate will increase interest in the exhibit, and she plans to aggressively promote it on social media.

“It’s an educational experience,” she said. “I had to do some background research to develop the exhibit, and I learned some things about my own history. So I think it’s empowering as well.”

Carter grew up in Detroit, where she later did community work that included campaigns on sexual assault awareness and to help homeless women. She obtained a doctorate in educational theory from Eastern Michigan University and in January joined the faculty in women, gender and sexuality studies at Wright State.

The Women’s Center advocates for equity, works to eliminate gender-based barriers, offers educational programming about women, gender and sexuality, and works to be a unifying force for people interested in feminist theory and activism for social justice.