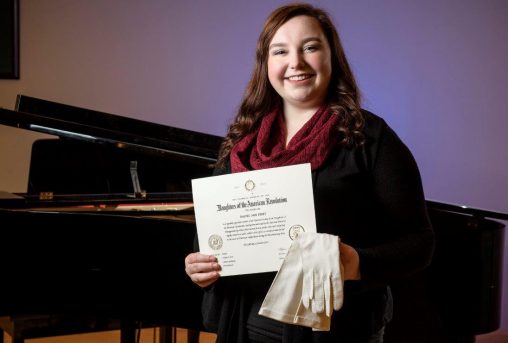 It is so important, she said, to thank members of the military for their service.

“They did something that we at home didn’t,” said Ebert, who works in the university’s Department of Leadership Studies. “They went out, crossed seas, fought and saw things that I personally can’t even imagine. I know they did some amazing things for us. And I think they deserve to be respected because of that.”

She’s come to the right place.

Wright State has long been recognized as a welcoming campus for veterans and military personnel. For years, Wright State has been honored by G.I. Jobs magazine, Military Times and Military Advanced Education. In March, Wright State earned the No. 1 ranking on Military.com and CollegeRecon’s list of Best Veteran Programs.

The university serves about 700 veterans or military-connected students — service members, Guard and Reserve members and military dependents. Wright State offers an array of resources to help those students transition to campus.

In 2014, Wright State opened the Veteran and Military Center, a 4,500-square-foot area designed to provide a welcoming space and support services on campus for veteran and military students. And last October, Wright State announced a special $100,000 scholarship fund designed to help members of the Ohio National Guard attend graduate school in what is believed to be the first program of its kind in the state.

“The thing that really bothers me is that so many veterans come back and don’t have jobs. That makes me sad. It’s just not fair,” she said. “There should be more options for them when they come back.”

Ebert grew up in Urbana. She attended Urbana High School, where she was president of student council.

In 2005, she helped found the Cuttahotha Society — the Urbana society of the Children of the American Revolution (CAR) — and served as president from 2010-14.

The CAR, which describes itself as the nation’s oldest patriotic youth organization, offers membership to anyone under the age of 22 who is lineally descended from someone who served in the Continental Army or gave material aid to the cause of freedom in the American Revolution.

One of Ebert’s ancestors is Joseph Robbins, an American soldier who fought in the Revolutionary War and later settled in Nova Scotia.

Community service is a strong emphasis of the CAR. On Veterans Day, Ebert and fellow members would make gift baskets for military veterans in nursing homes. They also placed flags on the graves of veterans and sent books they collected to soldiers stationed overseas.

Ebert later also became a member of the Daughters of the American Revolution (DAR), women who are directly descended from a person involved in the United States’ struggle for independence. More than 940,000 women have joined the organization since its founding 125 years ago. There are currently nearly 180,000 members of the DAR in about 3,000 U.S. chapters.

Ebert’s grandmother, Janet Ebert, is also an active member of the DAR and has stoked her daughter’s interest.

“I love listening to her talk about it. She’s really passionate,” said Ebert. “The family timeline she pulled out for me stretched throughout the house. It was so long. It’s interesting to know where my ancestors have been because a lot of people don’t know.”

After graduating from high school in 2015, Ebert enrolled at Wright State in music education, but later changed her major to psychology.

“The goal is to get my master’s in school counseling and be a guidance counselor,” she said.