He works his Merlin-like magic on the production floor, a stainless-steel jungle of towering fermenters, a mash mixer, lauter tun, boil kettle and whirlpool tank.

Welcome to the FigLeaf Brewing Co., a Middletown brewery and taproom that has quickly become a player in Ohio’s exploding craft-beer industry. The co-owner, head brewer and beer magician is Jeff Fortney, who has parlayed a degree in history and the study of theatre set design at Wright State University into a brewing business.

“I have followed Jeff’s progress for many years, having been an early encourager of his that he should pursue brewing if that’s what his real passion in life was,” said Jonathan Winkler, associate professor and chair of the Department of History at Wright State. “I’m pleased to see this success for him.”

The 40-year-old Fortney says the most gratifying part of his job is owning a piece of something.

“For me, it’s kind of the intersection between creativity and craftsmanship,” he said. “When it’s time to come up with a new beer, I do a lot of thinking, researching, pull influences from a variety of sources, formulate that all out in terms of a recipe. Then it’s all about seeing it through to completion with an eye toward consistency and fervent attention to sanitation.”

FigLeaf opened last October. It has more than 10,000 square feet under roof — including a patio — and features four 40-barrel fermenting tanks and a 40-barrel bright tank, where the beer is carbonated and matures. 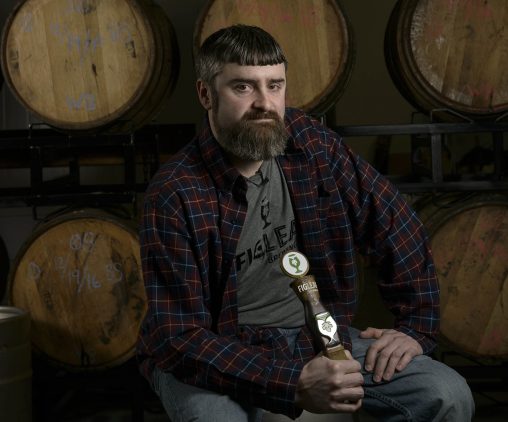 Jeff Fortney ’08 parlayed a degree in history and the study of theatre set design at Wright State into a growing craft brewery. (Video by Kris Sproles/ Photos by Will Jones)

On the production floor, a four-roller mill crushes the grain, which is corkscrewed to the fermenters by an auger. The 1,240-gallon fermenters have cone-shaped bottoms, which allow the yeast and hops to collect so they can be easily drained. Dials and a control panel bejeweled with green and yellow lights monitor the whole brewing process, which creates a steady hum.

Stacked like bottles in a wine rack are oak barrels in which certain special beers are aged. Next to the barrels sits a tower of wooden pallets, which are used to transport the beer for distribution.

The brewery is configured to dispense beer in its taproom and distribute kegs of beer to bars and restaurants. It has 100 to 150 accounts in the Dayton and Cincinnati areas and plans to offer beer in bottles and cans.

“We have a fair amount of production capacity, especially through the lens of a startup,” said Fortney. “Business is good.”

Fortney grew up in rural Preble County in west central Ohio, where as a boy he did a lot of fishing, exploring the woods and four-wheeling.

After graduating in 1995 from Preble Shawnee High School, where he was a member of the drama club, Fortney enrolled at the University of Toledo and got involved in theater. It was there that his cousin stoked Fortney’s interest in brewing. He brewed his first batch of beer, a brown ale, on the stove.

In 1996, Fortney transferred to Wright State because of its “excellent theatre program” and became heavily involved in the theatre department’s design and technology program, hoping for a career in set design. But he later changed his mind and took a break from college in 2000, working desk jobs with mortgage and other companies.

He returned to Wright State in 2006 to study history. He was especially interested in ancient history, military history, the Civil War and World War II.

“It’s fascinating. It’s interesting. It engaged me intellectually,” he said.

After earning his bachelor’s degree in history in 2008, Fortney began to pursue brewing as a career.

“I had always been interested in beer brewing and the history that goes along with it,” he said. “You are tied into a tradition, which is hundreds if not thousands of years old.”

He worked in Dayton at Belmont Party Supply, where he managed the home-brew shop, and then for Wooden Shoe, a tiny brewery in Minster. After that was the Rivertown Brewery and Barrel House in Cincinnati and finally at Warped Wing, where he became the Dayton company’s first production employee.

Launching FigLeaf was no small feat.

“You’re trying to pull together all of these disparate threads,” said Fortney. “Financing is obviously a very big piece of that. And there are a lot of hurdles when you want to go from zero to something this large. It’s not the easiest thing to pull off.”

The owners came up with the FigLeaf name while sitting around the living room brainstorming ideas.

“We thought it had an upscale vibe to it,” said Fortney. “We also liked the counterpoint of a name that embraced natural elements despite the quasi-industrial feel of the brewery itself and its location.”

Fortney has been able to use his Wright State experience in theatre and history in building his business. He said the beauty of a liberal arts education is that you develop skills that can be applied to a wide range or careers.

His experience in theatre taught Fortney project management and demonstrated how complex projects with many elements could all come together in a cogent way.

“It was very hands-on. We were building scenery. There was a very set schedule and an ebb and flow to things,” he said. “History is more strategic thinking. It’s more analysis.”

Fortney’s job as head brewer has him working up to 80 hours a week. A typical day might first involve using strong detergent to clean clamps, gaskets and other equipment used in brewing. And if it’s a brew day, he takes the milled grain through the entire brewing process.

“At this point, it’s a full day of nonstop movement,” he said. 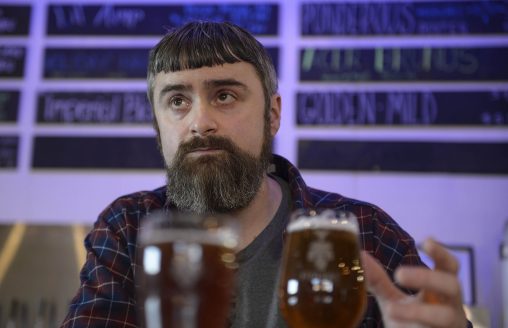 Jeff Fortney says a liberal arts education helps students develop skills that can be applied to a wide range or careers.

Fortney’s philosophy is to provide customers with many different types and styles of beer and then focus on the ones they like.

“We have a very solid core of beers, and I really endeavor to make beers very drinkable,” he said.

So far, FigLeaf has produced beers ranging in alcohol content from 3.9 to 10 percent. Its most popular beers have been a light cream ale made of basmati rice; Iso-Trope, an American IPA with a pineapple and herbal note; and Pride of CinDay, a British-style bitter.

Session beers, which are designed to drink over an extended period because of their relatively low alcohol content, are well-represented at FigLeaf.

“The beers so far have been pretty solid, pretty well-reviewed, well-received,” Fortney said.

Ohio is a maturing craft beer market, with an explosion of breweries, brewpubs and taprooms. Fortney believes their success is in part because people want to support their local community and enjoy the brewpub ambiance and experience, where they can drink a beer in the shadow of brewing production.

He says craft brewers are part of a “brotherhood,” a fraternity that looks out for each other and is united in showing beer consumers a broader picture than what mass commercial brewers offer.

“We’re trying to fight for our place,” he said. “It’s not like working in a bank or selling widgets. People who are in craft beer are typically very passionate people.”