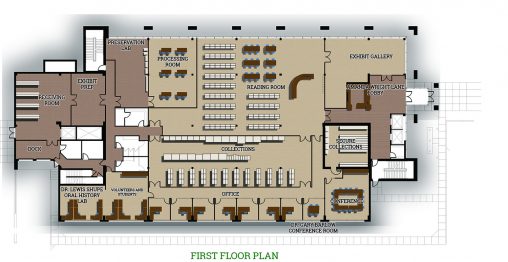 They started in a closet nearly 50 years ago. Today, the collections have grown to include the iconic photograph of the Wright brothers’ flight at Kitty Hawk, North Carolina, a piece of fabric from Charles Lindbergh’s history-making Spirit of St. Louis and the Dayton arrest record of infamous gangster John Dillinger along with the handcuffs used to bring him in.

There are 1,000 different collections in Wright State University’s world-renowned Special Collections and Archives. And they are all tucked into a relatively small space that squeezes researchers and restricts public access. But there are plans to change all of that.

Discover Your Story: The Campaign for the Wright State University Archives Center will transform the former corporate headquarters of the Wright-Patt Credit Union at 2455 Presidential Dr. – just across the street from the Dayton Campus – into the archives’ new home.

“We’re bursting at the seams and have been for several years,” said Dawne Dewey, head of Special Collections and Archives. “We’ve got this international reputation and it’s really hard to be the kind of archive that we’ve already become with the facilities that we have. So we have to do something.”

The archives currently have 12,000 square feet and are split between two campus buildings — Dunbar Library and the Medical Sciences Building — forcing staff members to take a five-minute walk each way to do their jobs. In addition, they have to cart materials through a heavily used parking lot.

Wright State President Cheryl B. Schrader said she was dazzled by the collections when she toured the archives “incognito” just before assuming her position as president.

“I was truly amazed by what I saw,” she said. “The reality is that we have run out of adequate space to preserve and protect these timeless treasures for future generations.”

The archives’ new home would nearly triple its existing space — to nearly 30,000 square feet — expand exhibit areas, add a preservation lab and give greater access to the public. 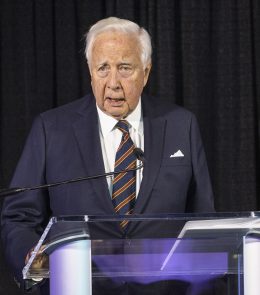 David McCullough conducted research for his book “The Wright Brothers” at Special Collections and Archives.

“This is really an exciting step for us,” said Dewey. “The building is very attractive and lends itself really well to what we want to do. People currently don’t get to see all of the unique and amazing treasures that we have. This will be an exciting and more accessible location for the community, region and world.”

Erix Infante, a graduate public history student, saw the blueprints for the center in one of Dewey’s classes.

“It is mind-blowing,” said Infante. “Our aviation-history archives is already fantastic, but this will make it so much better. A lot of students will be able to go there to do research.”

The archives was born in 1967 with the donation of papers from the estate of James M. Cox, who founded the Dayton Daily News and the chain of Cox newspapers and who served as governor of Ohio, a congressman and was a presidential candidate.

Collections in the archives have grown to over 15,000 linear feet — or nearly three miles long. They feature aviation history — from kites to the space age; local and regional history, with a focus on 11 surrounding counties; and Wright State history.

The reading room contains more than 20,000 volumes, including more than 16,000 books and journals on aviation history. The Wright Brothers Collection is the world’s most extensive and includes over 4,000 original photographs, documents, publications, including their personal library, albums, medals and awards, family letters, diaries and personal correspondence.

“We are a leader in collecting and preserving the history of aviation in Ohio and beyond,” said Dewey.

Wright Lane, who along with McCullough is distinguished honorary chair of the fundraising campaign, said the archives hold the stories that are “the heartbeat of who we all are.” She said the new center will change the perception of what an archives is.

“When you’re the very best at what you do, the stuff just keeps coming,” Wright Lane said.” “We will be able to share the stuff as we’ve never shared it before.”

McCullough, Academy Award-winning actor Tom Hanks and television crews from CBS, CNN and The Discovery Channel and international filmmakers from Japan, China and Europe have all visited the archives. It has also been used by aviation historians, students, authors, publishers, NASA experts, urban historians and family history researchers.

Collections have been loaned to the Smithsonian National Air and Space Museum, the Zeppelin Museum in Germany, the Museum of Flight in Seattle Washington, the Royal Air Museum in Great Britain and the Paris Air Show for special exhibitions.

“The archives has gotten a lot of attention in the past couple of decades,” said Dewey. “People worldwide know who we are. Christie’s Auction House in New York City and dealers across the country contact us when they have something we might want to bid on. They know what we collect.”

The archives are also home to a collection of first editions of the works of Paul Laurence Dunbar, the Dayton poet and novelist known for his dialect poetry. And they house the handcuffs used to arrest Dillinger in Dayton in 1933 as well as his fingerprints, arrest record and letters he wrote. 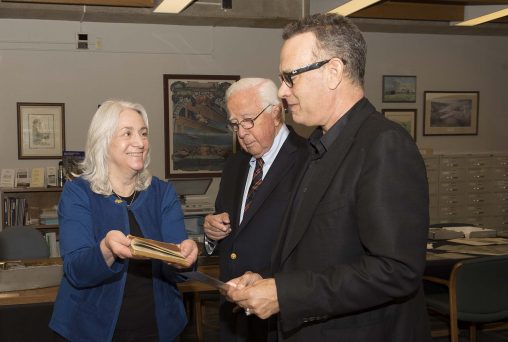 Dawne Dewey, head of Special Collections and Archives, showed items from the university’s Wright Brothers Collection to David McCullough and Tom Hanks during their visit at Wright State in April 2016. (Photo by Will Jones)

The collection includes the Dayton Daily News Archive, or photo morgue. It measures about 2,500 linear feet and contains millions of original photographs and news clippings documenting the history of the city and region. Images in the collection document presidential visits to Dayton, such as those of John Kennedy and Franklin Delano Roosevelt, and chronicle the arrival of the Beatles at Lunken Airport in Cincinnati in 1964.

Films, diaries, letters, records, albums and audio files chronicle a wide variety of topics — from floods to flirtations, civil war and civil unrest, the Holocaust and homecomings, an astounding last century-and-a-half of stories that catapulted the nation and the world in to a whole new future.

Collections arrive at the archives in everything from trunks, garbage bags, beer boxes, rubber tubs and grocery sacks.

“We have to take all of that material and evaluate it for mold, mildew, infestation, and then we have to organize it, catalog it, get it ready for researchers, do all the preservation work,” Dewey said. “There is a lot of behind-the-scenes work that has to happen before patrons ever see stuff. I don’t think people realize that.”

The new Wright State University Archives Center will feature a grand entryway populated with a gallery of exhibits, including video, audio and interactive ones. A 4,000-square-foot, glassed-in reading room with collections of books and journals and table space for researchers will be double its existing size. The room will be equipped with audio and video viewing capabilities and can be used for events.

Collections on the first level will include the Dayton Daily News Archive, lateral files for oversize items, such as architectural drawings, large photographs, newspapers and other large documents. A vault will secure extra valuable and marketable collections such as those of the Wright brothers, Cox, Dillinger and Roosevelt. 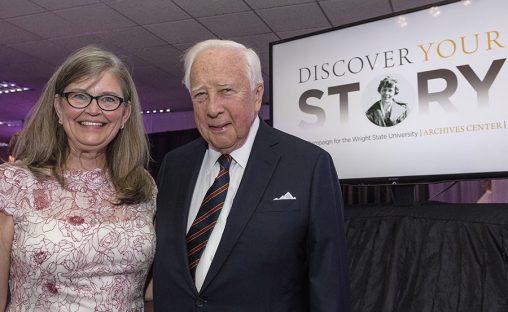 Amanda Wright Lane and David McCullough are co-chairs of the Discover Your Story campaign.

There will also be offices, a conference room big enough for small workshops, a forensic work station to evaluate and organize electronic records, an oral history interviewing lab, a loading dock to receive collections, a clean — or isolation — room to evaluate collections and a space for exhibit preparation. The archives installs an average of 80 exhibits a year in Dunbar Library and in the community.

The new building will allow for the expansion of outreach programming and more exhibits of archival materials as well as items from major museums around the country. It will also enable the creation of a processing room and preservation lab, which will be used to mend, encapsulate, humidify and flatten materials. The hiring of a conservator would enable the archives to treat many materials instead of contracting them out and offer revenue-producing preservation services to the community and other libraries.

The lower level of the building will feature high-density shelving for collections — including original artwork — a classroom and a space for digital services that will include scanning stations. All of the storage areas for collections, including film, will be climate controlled to assure proper preservation temperature and humidity.

The archives currently have five professional archivists, as well as six community volunteers and several graduate and undergraduate student assistants and interns. The new building will also be used for student instruction since the archives is a learning lab for Wright State’s graduate program in public history.

“There will be great tour opportunities too,” Dewey said. “Right now, it’s really hard because it’s so crowded.”

There are also plans for outdoor art and exhibits, including projecting historic images on the side of the building and holding special events on the patio such as showing historic films.

Rebecca Cole, vice president for university advancement and president of the Wright State University Foundation, said it is critical to make sure that “our stories are not lost, that our treasures are protected and that they exist for today’s use and for future generations.”

Artist rendering of the entrance to a reading room, where students, scholars and visitors will be able to examine historic materials.

Nearly $400,000 has already been raised in the fundraising campaign, thanks to three donations.

“We have a lot of big dreams,” said Dewey. “The archives bring tremendous value to the university — publicity, community engagement, worldwide engagement. It’s long past time that we do something for them.”

For more information or to make a gift to the Wright State University Archives Center, visit wright.edu/give/archives.