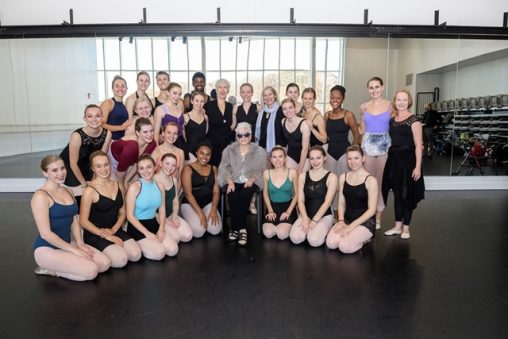 As 102-year-old Zoe Dell Nutter watched the leotard-clad Wright State University dance majors go through their paces, Nutter’s days of dancing with the San Francisco Ballet bubbled to the surface of her memory.

And as the 25 students thronged around Nutter following the class at the Creative Arts Center, they peppered her with questions about those days.

“I’m glad I had a chance to do it,” she said after applauding the students’ performance in class. “All I think I can tell you is it’s worth it.”

Nutter, a dancer and a model, later became a commercial pilot and philanthropist. 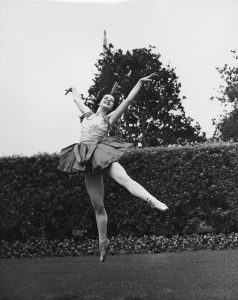 Zoe Dell Nutter danced with the San Francisco Ballet from 1937 to 1940.

Her appearance at the Intermediate Ballet class on Nov. 9 coincided with an announcement that she has established the Zoe Dell Lantis Nutter Dance Scholarship, an endowed scholarship that promises to help fund the future education of Wright State dance students indefinitely.

“She still has an extreme passion for dance and is supporting what we all do here at Wright State,” said Jennifer Buckwalter, assistant dean for community and student engagement at the College of Liberal Arts. “We’re very thankful for her and her generosity.”

Buckwalter showed the students a pair of pink ballet slippers, softened and frayed from use. The slippers, displayed in a small glass case, had been worn by Nutter during her days with the San Francisco Ballet.

“If these shoes could talk,” said Buckwalter.

Nutter grew up in Medford, Oregon, and after high school moved to San Francisco, where she danced for the ballet from 1937 to 1940. At age 20, she was featured in a 1939 LIFE magazine article about the Golden Gate International Exposition, when she was dubbed the most photographed woman in the world.

Aviation executives approached her about promoting air travel, and she would fly 100,000 passenger miles as a hostess to meet mayors and governors around the nation demonstrating the safety and comforts of air travel.

After a short film career with Paramount Pictures, Nutter joined the United Service Organizations to entertain troops during World War II. When surgery ended her dancing career, she earned her pilot’s license and would log over 2,000 flight hours, earning commercial, instrument and multi-engine ratings.

Nutter is the widow of Ervin J. Nutter, who had been chief executive and president of the aircraft parts manufacturer Elano Corp and is the namesake of Wright State’s arena. 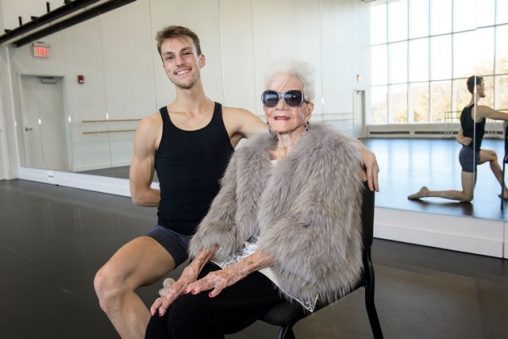 Sophomore dance major Jacob Shade is the first recipient of the Nutter scholarship.

“Mrs. Nutter is an inspiration to our dance majors,” said Gina Walther, associate professor of dance. “This scholarship is so special because it is dedicated to them.”

The first recipient of the Nutter scholarship will be sophomore dance student Jacob Shade of Lebanon, Ohio. Shade began dancing at age 13, taking a recreational dance class at the urging of a friend. He later attended the Butler Tech career center in Hamilton, which had a dance program.

Most recently, Shade was selected to take part in a two-week summer “intensive” in Los Angeles run by Dwight Rhoden, an internationally acclaimed dancer and one of the most sought-after choreographers in the business.

After graduating, Shade would like to be part of a dance company and eventually teach choreography. He said the Nutter scholarship reaffirms his hard work and inspires him to keep working to reach his dreams.