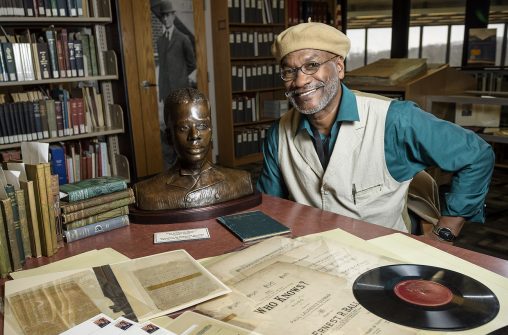 A one-of-a-kind bronze bust of acclaimed poet and novelist Paul Laurence Dunbar has been gifted to Wright State University by its creator, Dayton artist Reginald Harmon.

The bust was displayed Feb. 21 along with exhibits of Dunbar’s works at the Special Collections and Archives on the fourth floor of Dunbar Library during a reception and program.

The event drew nearly 40 students, faculty and members of the outside community. Materials from other African-American history collections in the archives were also on display and attendees were be able to take a behind-the-scenes tour of the archives.

Harmon said he feels a responsibility as an artist to help immortalize important historical figures.

“Dunbar deserves this,” said Harmon. “I would hope that people who see it understand the importance of the contribution Dunbar has made. I think this is special because it is a labor of love that I have expressed from our community where he grew up.”

Born in Dayton in 1872, Dunbar was one of the first African-American literary figures to garner critical acclaim on an international scale. He began to write stories and verse when still a child and published his first poems at the age of 16 in a Dayton newspaper. Although he lived just 33 years, Dunbar’s contributions in a variety of genres left a legacy that endures through the present day.

Dawne Dewey, head of the Special Collections and Archives, said the bust and other Dunbar materials help to demonstrate that Dayton’s rich history includes much more than the Wright brothers.

“They did a phenomenal thing and they are a big part of Dayton’s history, but Dunbar is also part of that history,” she said. “It just needs to be brought out more. We can do that by having this bust here so students can better experience who this man was, see him as a living breathing individual, read his poetry and learn from him.”

Dewey said she hopes to make the Dunbar bust part of a featured section in the exhibit gallery of what is planned to be a new home for the archives. Wright State has launched a $6.5 million fundraising campaign and is seeking federal funds for a new $8.2 million Archives Center.

“I feel honored that my art — this bust — will accompany all of Dunbar’s great works in the new facility,” said Harmon. “It’s something that will be around for generations. I feel like I have become a part of that.”

The archives has a nearly complete, inscribed collection of Dunbar’s first-edition books. It also has first-issue stamps, newspaper clippings, an original handwritten poem from Dunbar to a friend, an original recording of a Dunbar poem put to music and Orville Wright’s copy of Dunbar’s first published book – “Oak and Ivy.”

A Digital Text Collection and photographs of Dunbar are accessible on the archives website at libraries.wright.edu/special/dunbar. 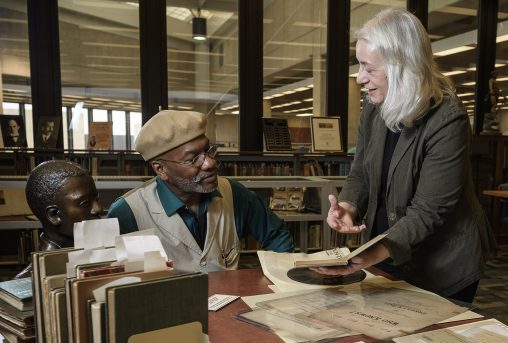 Harmon, founder and CEO of Infinite Concepts LLC in Dayton, is an accomplished artist in the visual arts, music, design and poetry. His artistry reflects the social consciousness that embodies the culture of the black community. Infinite Concepts produces paintings, sculptures and other works of inspirational art that includes renderings of African-American musicians, poets, political activists and other figures.

Born in Iowa, where his father attended and graduated from medical school, Harmon and his family later moved to Lebanon, Ohio, and then to Dayton. Harmon grew up in the same neighborhood as did Dunbar, who was at the epicenter of Dayton’s golden age of invention and creativity.

Harmon liked to draw in school, so his mother enrolled him in a Saturday art program at the Dayton Art Institute. He studied painting and sculpting as well as pottery and jewelry-making.

“It was like I just had a natural feel for these things,” he said. “I started doing things in clay, and it was amazing. It blew me away.”

Harmon also got into music, learning how to play the piano and later the saxophone. Over his lifetime, he has recorded four CDs, published a catalogue of about 400 songs and has even had his music placed in a documentary film.

After graduating from Patterson Co-Op high school in 1971, Harmon attended Central State University. He later moved to New York City, where he graduated from the Fashion Institute of Technology before returning to Central State and graduating with a degree in art education.

Harmon made the bronze sculpture of Dunbar about a year ago after studying photographs of Dunbar taken during different periods of his life. Molten bronze was poured into a temporary mold created by sculpted wax that was melted and deliberately lost in the process, which results in a one-time, one-of-a-kind sculpture or bust.