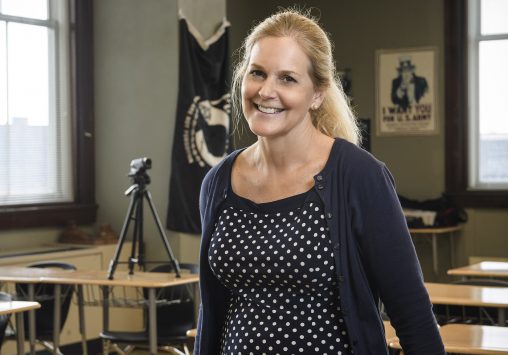 Bridget Federspiel works with both high school students and Wright State student veterans to interview U.S. veterans for the Library of Congress (Photos by Erin Pence).

Federspiel grew up in Kettering, graduating from Fairmont West High School. She earned a bachelor’s degree in history with a minor in education from the University of Dayton in 1989 and over the ensuing years taught at Bethel High School, Springfield Catholic High School, Chaminade-Julienne High School and Wilmington High School.

In 2002, she took a job and a pay cut at Stivers to serve the students drawn to the inner-city school. She currently teaches American history and world history as well as advance placement classes in U.S. and European history. She is also adviser to the Junior Council on World Affairs.

“It’s fulfilling,” she said. “I know that inner-city schools need good teachers. It’s a challenge when you’re not just a teacher to these students, you’re a lot more.”

“I bought a videocamera from the pawnshop downtown, and we had a tape recorder,” she said. “We collected 50 interviews the first year.”

The interviews can be a lot of work. When they are conducted at the homes of the veterans, Federspiel must transport her student interviewers because they are too young to drive. Each interview must be 30 minutes long. There is paperwork to do, photos to be taken, and the interviews burned to CDs and DVDs.

Federspiel’s video interviews are often used by historians conducting research. They reach out to her for copies to save them a trip to the Library of Congress. They also often want to contact the veterans themselves to get more information. 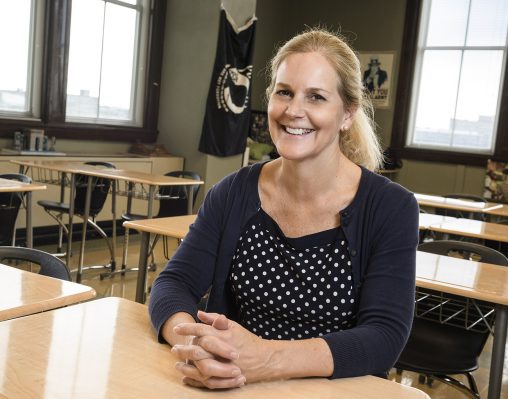 “There is so much more,” she said. “That one-on-one personal connection during the interviews is priceless. You cannot overemphasize that. I think it makes me a better teacher.”

Federspiel also does a lot of traveling in order to bring her observations back to the classroom. In 2006, for example, she went to Australia for four weeks as part of the Fulbright-Hays program.

“My travel experience really helps me teach the kids,” she said. “I’ve gone to Normandy. I’ve got sand from Omaha Beach and Utah Beach and I hand it out to the students when I teach about D-Day.”

Most of the veterans tell the students the military was good for them, that it straightened out their lives and gave them discipline. But virtually all of them say it’s necessary to try to avoid war at all costs.

Many of the veterans who were interviewed have since died.

“I’ve had wives call me or send me a card saying, ‘We played the interview at his wake,’” Federspiel said.