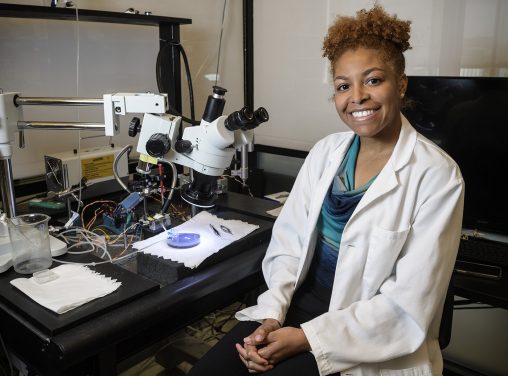 Christiana Draper, an M.D./Ph.D. student at the Boonshoft School of Medicine, won a National Institutes of Health Diversity Supplement Award to support her research. (Photos by Erin Pence)

She has driven a Navy destroyer, flown a fighter jet, piloted a helicopter and even helped guide a ballistic missile submarine.

And that’s just for starters.

Most recently Draper won a National Institutes of Health Diversity Supplement Award, which brings scholarship money and support for her research in a lab directed by Sherif Elbasiouny, a Wright State neuroengineer who is working to develop new treatment options for Amyotrophic Lateral Sclerosis (ALS), a devastating neurodegenerative disease that robs patients of the ability to move and breathe.

“I really want to do a postdoc/residency at Walter Reed Military Center,” said Draper, who managed to continue working behind the microscope during her interview and photo shoot. “I’m really interested in neuro-rehabilitation, spinal cord injury, limb loss.”

Draper grew up in rural Bassett, Virginia, as one of seven children. One of her sisters has cerebral palsy, which sparked Draper’s early interest in how the brain works.

“I’ve always been interested in the brain,” she said. “As a kid, I wanted to be a neurosurgeon.”

“I knew I needed a lot of discipline and I wanted the structure of the military,” she said.

Monday through Friday Draper would arise at 5 a.m. for physical training or to drill. Then there were classes all day — which included courses required by the military such as naval engineering and navigation — followed by basketball practice.

During the summers, she went on active duty for Navy ROTC. When she trained in San Diego she flew a jet fighter, a helicopter and T34 training aircraft. She drove a destroyer that was ported in Hawaii and in the Bahamas steered the USS Nevada, a ballistic missile submarine.

“I have been on numerous submarines, ships,” she said. “I have flown on jets. They let us co-pilot. They gave us control.” 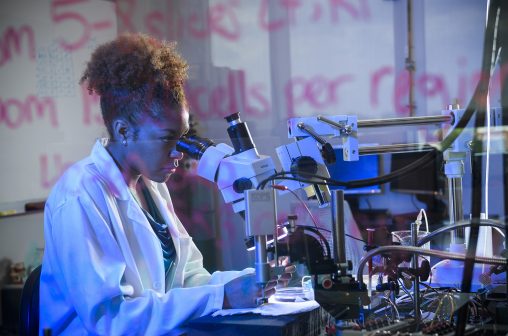 Christiana Draper works in the electrophysiology group in a Wright State neuroengineer Sherif Elbasiouny’s lab, recording the electrical activity in the spinal motor neurons of mice.

Draper found herself impressed with those in the Navy, especially enlisted personnel.

“It’s absolutely crazy to me the dedication and the hard work that they put into their jobs,” she said. “And they do it every day.”

After graduating with a bachelor’s degree in psychology/pre-med in 2015, Draper arrived at Wright State.

She credits her success at Spelman to good time management.

“I think it prepared me for medical school,” she said.

ALS is commonly known as Lou Gehrig’s Disease for the New York Yankees star who was struck down by it. It begins with the progressive loss of muscle function, followed by paralysis and ultimately death due to inability to breathe. Currently, there is no cure for ALS and no effective treatment to halt or reverse the progression of the disease. Most people with ALS die within three to five years from when symptoms first appear.

Elbasiouny’s research is supported by a five-year, $1.6 million NIH grant. It involves the use of mouse models of familial ALS, high-powered microscopes and computer-generated, three-dimensional measurements of motor neuron cells.

Draper is in the electrophysiology group. She records the electrical activity in the spinal motor neurons of mice.

“The goal of the ALS project is to essentially determine motor neuron excitability and find better therapeutic options,” she said.

Draper, who would be the first African-American M.D./Ph.D. student to graduate from Wright State, went directly to medical school after Spelman and didn’t get the clinical research experience that many graduate students have. She said the NIH diversity award will help her publish her research and pave the way for additional grants and funding.

“I want to be able to do the research and be a clinician in the military,” she said.