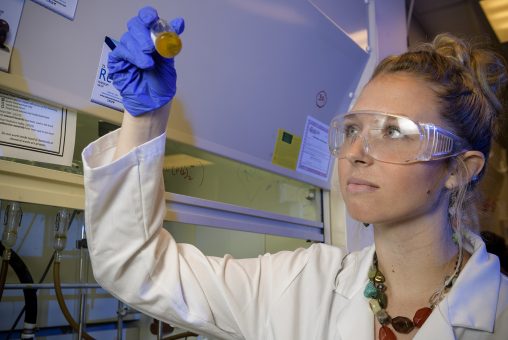 Wright State chemistry major Catherine Evers Smith is part of a research team that received funding from the National Institutes of Health to work on a novel approach to fight cancer. (Photos by Erin Pence)

She and chemistry have chemistry.

Catherine Evers Smith, a senior chemistry major at Wright State University, has had a love affair with chemistry since high school.

“I like that it gives a really deep understanding of why everything is interacting the way it does,” said Evers Smith. “And a lot of biology you can understand from a very chemical standpoint. I also really enjoy chemistry research.”

Evers Smith grew up in Morrow near Cincinnati. Her mother is in research and development at Procter & Gamble; her father works in the TriHealth hospital system.

“One of the reasons I liked Wright State because you can get involved in research as a freshman,” she said.

Evers Smith is part of a research team that won a $462,195 award from the National Institutes of Health to work on a novel approach to fight cancer.

Kuppuswamy Arumugam, an assistant chemistry professor in the College of Science and Mathematics, and Jonathan F. Arambula from The University of Texas at Austin, are leading the effort, which includes postdoctoral, graduate and undergraduate researchers such as Evers Smith.

But research and classwork are only part of what Evers Smith does.

She is a learning assistant for General Chemistry II, treasurer of the chemistry club and a member of the Dean’s Circle, the Pre-Health Society and the Student Honors Association. 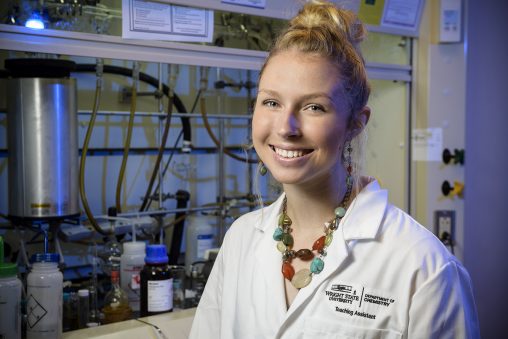 Catherine Evers Smith hopes to attend medical school and eventually work as a medical scientist, with an M.D. and Ph.D.

Evers Smith also volunteers at Miami Valley Hospital as part of the Hospital Elder Life Program and at the Center for Neurological Development in the village of Burkettsville west of Sidney.

But it’s not all work and no play.

Evers Smith took up judo and is the only female member of Airstrike, Wright State’s Ultimate Frisbee club team.

“I love the sport; I played in high school,” she said. “When I first came to Wright State I wanted to meet new people. And I think sports is the easiest way to do that. The people are great.”

Evers Smith plans to apply to medical schools, including the Wright State Boonshoft School of Medicine. Her career goal is to be a medical scientist, with an M.D. and Ph.D.

“My goal would be to see patients a couple days a week and spend the rest of my time in the lab researching treatments and cures,” she said. “That would combine two of my passions.”