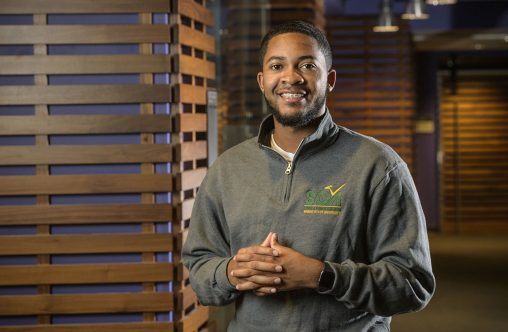 Kevin Jones majors in political science major and is president of Black Men on the Move and associate director of diversity and inclusion and chief policy officer of the Student Government Association.

The political bug bit him in high school when he was job-shadowing a federal prosecutor. That led Kevin Jones to stints with the National Urban League, the Columbus City Council’s Division of Community Engagement and the Franklin County treasurer’s office.

Jones is a first-generation college student. He grew up in Columbus, the youngest of four children. In 2012, while attending Groveport Madison High School, he began job-shadowing a U.S. attorney, an experience that introduced him to the court system and local politics.

“That’s really where it all started,” he said. “From there I joined different organizations, met different political figures.”

While still in high school, Jones got involved with the Columbus chapter of the National Urban League, working as an intern for the civil rights group’s Youth Engagement Division.

“We focused a lot on youth development,” he said.

After graduating high school in 2016, Jones enrolled at Wright State majoring in political science with a minor in police and investigative studies.

On Aug. 1, he was named chief communications officer of the Central Ohio Young Black Democrats. He handles the group’s marketing and promotions as well as communications between partners, political candidates and their teams. He also manages the group’s website and its memberships.

This year he has worked in the office of Cheryl Brooks Sullivan, the first African American elected treasurer in Franklin County. As chief investment officer of the county, she is responsible for managing more than $1 billion.

Jones does communications work, sending out emails to constituents, answering phone calls from taxpayers and supporting the treasurer at community events. He said the whole experience has strengthened his leadership, networking and multitasking skills.

“But the biggest thing I got from it was learning how to carry myself in an atmosphere full of kings and queens,” he said. “I’ve definitely learned how to maneuver in that political realm and become a friend while getting business done at the same time.”

At Wright State, Jones was president of Black Men on the Move when the group in 2017 founded Retain the 9, which has become the university’s official diversity retention initiative.

Black Men on the Move is a student organization that works to strengthen the relationship between black men and Wright State by providing academic guidance, professional and personal development, leadership skills, cultural awareness, network opportunities and beneficial college experiences. 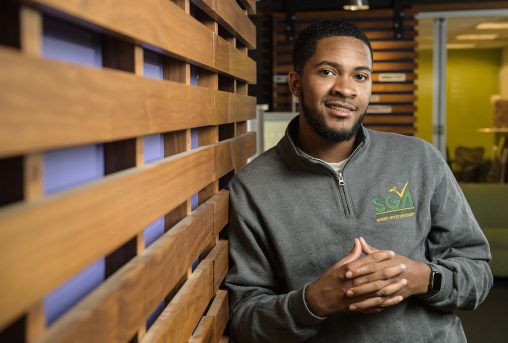 As president of Black Men on the Move, Kevin Jones helped found Retain the 9, which has become the university’s official diversity retention initiative.

The Retain the 9 initiative was created by a Student Government executive order. The Retain the 9 name came from the 9.9 percent of students on campus who are African American.

“We needed a catchy name, so we came up with Retain the 9 and it just stuck,” said Jones.

The initiative has since been expanded to cover all underrepresented minorities at Wright State, including international students.

During Move-In Day on Aug. 22, a Retain the 9 task force distributed surveys to incoming students in hope of identifying those most at risk of dropping out and connecting them with university resources to help keep them in school.

Jones says he enjoys staying busy despite a schedule that can be hectic.

“It keeps me focused on the light at the end of the tunnel,” he said.

To give himself a break, Jones occasionally takes what he calls “self-care days.”

Jones says friends and acquaintances have encouraged him to run for office but that he prefers to labor behind the scenes and eventually start his own foundation.

“I think that someone who is chief of staff or a related position is where the real work happens,” he said. “I want to be out on the field. I want to be really hands-on.”