Academy Award-winning actor Tom Hanks paid a personal tribute to Wright State University’s class of 2020, calling the graduates “the chosen ones” as they make their way through the challenges of the coronavirus pandemic.

Hanks delivered a five-minute video message that was played during a virtual ceremony on May 2 for students graduating from Wright State’s Department of Theatre, Dance and Motion Pictures.

In the video, Hanks said the students have been “chosen” in many ways, including because of their ability to overcome the challenges of the times.

“You are the chosen ones because of a fate unimagined when you began your Wright State adventures,” said Hanks. “You started in the olden times, in a world back before the Great Pandemic of 2020. You will talk of those earlier years in your lives in just that way.”

Hanks said the students are finishing their Wright State careers during “the great reset, the great reboot.”

Hanks told the students they will be enlightened in ways their degrees from Wright State never held in promise.

“You will have made it through the time of great sacrifice and great need,” he said. “And no one will be more fresh to the task of restarting our measure of normalcy than you — you chosen ones.” 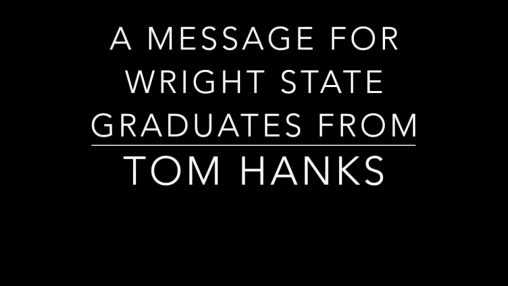 Joe Deer, artistic director and chair of the Department of Theatre, Dance and Motion Pictures, had asked W. Stuart McDowell, who is retiring after being artistic director of the department for 26 years, if Hanks would be open to sending a short message. McDowell, who has a longstanding friendship with Hanks, came through and the video message was sent to Deer the evening of May 1.

“This speech means a great deal to all of us,” said Deer. “We’re so grateful for his inspiring words and the care he took to give what was clearly a very carefully written speech. He is one of a kind.”

Hanks, an acclaimed actor, producer and director, charmed students, faculty, staff, alumni and others during a visit to Wright State in 2016 to dedicate the Tom Hanks Center for Motion Pictures. He also helped lead Wright State’s Rise.Shine. fundraising campaign that raised more than $167 million.

Hanks and his wife, Rita Wilson, tested positive for the coronavirus while on location for a film in Australia. They have both fully recovered from the virus after being quarantined in Australia.

In the graduation video, Hanks told the Wright State students they will be the ones to form the new structures, define the new realities and “make the new world, the world after all that we have been through.”

“The future is always uncertain,” he concluded. “…We are certain of one thing on this day — you will not let us down. Thank you. Congratulations.”