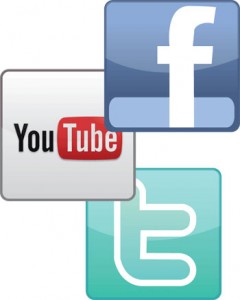 Facebook posts and Twitter tweets are usually not great literature. And all of the acronyms, abbreviations and word shortcuts in the online conversations can make English seem like a foreign language.

But social media may be making better writers out of many incoming college freshmen, says the man who directs Wright State University’s writing programs.

“The last few years, with the rise of Facebook and Twitter and social networking, students’ writing skills are probably improving a little bit because they’re actually writing for pleasure,” said Richard Bullock, Ph.D., assistant chair of English in the College of Liberal Arts. “They’re writing a lot more than when all they did was write for school.”

Bullock said one of the biggest challenges for students historically has been learning how to write for different audiences. In high school, he said, students often see themselves as writing only for the teacher.

“You say something on Facebook and you get five angry responses you weren’t anticipating, you’ve learned something about audience,” he said. “I think students are getting savvier as they do more writing online because they need to understand that what you write will have consequences if you don’t write appropriately.”

Jeffrey T. Grabill, director of the Writing in Digital Environments Research Center at Michigan State University, studied students in a first-year writing class at the university.

“Students today write more than any generation of students in human history. Their lives are literally saturated with text,” Grabill said. “Some people believe that social media and texting are ruining writing. I’m not sure that is true. What is true is that it is difficult to shape writing for audiences, purposes, and contexts, whether that writing is done online or not.”

Some scholars say this new writing is more engaged and connected to an audience and that colleges should encourage students to bring lessons from that writing into the classroom.

The Stanford Study of Writing tracked 189 students for five years beginning in 2001. Stanford Professor Andrea Lunsford collected more than 14,000 student writing samples, 38 percent of which was personal writing outside of class.

Lunsford concluded that the students were good at assessing their audience and writing in a way that best got their message across.

Mark Bauerlein, professor of English at Emory University, said students have grooved their writing to fit the format of text messaging, Facebook posting and tweeting.

“The habit has spread to the point that young people write more words than ever before, but they do so in a clipped media,” Bauerlein said. “The messages are short and casual, quickly composed and never revised. Over time, the restraints of the media become lodged into their dispositions so that their expressions naturally fall into the text-message style.”

He said that style doesn’t translate to academic writing.

Robert Rubin, senior English lecturer at Wright State, uses Facebook as a teaching tool in his composition and University Honors seminar classes. The classes have their own Facebook page, which students use to write essays and hold class discussions.

A recent class used Facebook to discuss assigned readings by Indian writers and a film about a wedding that took place in India. The 19 students clattered away at their keyboards with their backs to each other, posting comments as if they were a world away.

“What I’m attempting to do is meet them where they’re at—on Facebook—while I’m teaching them the conventions of academic writing and see if these two worlds can come together somehow,” Rubin said.

Freshman Andrew Weber of Beavercreek describes Rubin’s class as an “improv essay session.” Weber, who aspires to be a writer, finds it easy to switch back and forth from the informal social-media writing style to the academic style. And he said Facebook doesn’t limit development of his vocabulary.

“I can use the word ‘pedantic’ on Facebook, and maybe some people won’t get what that means, yet it was the right word for the topic,” he said. “But you don’t have to use big words unless that’s what it calls for.”

Freshmen Nichole Rakoczy of Bellbrook acknowledges that the abbreviations, acronyms and other language shortcuts often used by Facebook users could pose a threat to their academic writing unless they exercise some discipline. She said she uses a much expanded vocabulary in her academic writing.

Rubin said the majority of his students seem to get that.

“A lot of what they write is not written in that texty kind of code,” he said. “Instead, most of them are using pretty good writing conventions.”