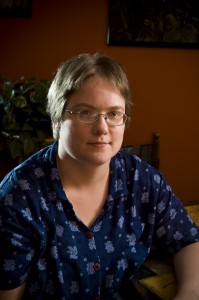 Wright State student Lisa Daxer uses her blog to give readers a glimpse of what it's like to be a college student with autism.

On her blog, Wright State University student Lisa Daxer touches on typical blog-like topics such as school, work and exercise. But the defining subject of her blog is autism—because she has it.

Daxer’s online insights that enable readers to see the world through the prism of a college student with autism have caught the national eye. The 27-year-old biomedical engineering major was recently featured in a radio story about autism that aired on NPR’s All Things Considered show.

“It’s really intimidating to have people actually listening to what I’m saying,” Daxer said. “I’m baffled that they’re giving me all this responsibility because inside I still feel like a child.”

Autism is a neurodevelopmental disorder that can short-circuit communication, impair social interaction and sometimes result in repetitive behavior such as hand flapping, spinning and rocking.

One autism spectrum disorder is Asperger’s Disorder, characterized by lack of developmental delay or speech delay. Many autistics with Asperger’s are extremely smart and talented people, but struggle with social interaction, sensory processing and executive function.

Daxer, who has been diagnosed with Asperger’s, acknowledges that she sometimes has trouble understanding and fitting in with people because facial expressions, body language and social cues are often lost on her. She relies heavily on the words people use.

When trying to fit in with non-autistic students, Daxer has learned that certain subjects—such as death—are off-limits.

Daxer has made a science out of observing the behaviors of non-autistic students, whom she calls “neurotypicals.” She says their identities appear to be shaped by which groups they are in.

“They seem to be highly dependent on their families and their friends to define themselves,” she said. “It can be a wonderful thing because it can lead someone to instinctively help another person when they don’t even think first that they might put themselves in danger. Or it can be a bad thing because they might go along with something without thinking about how immoral it is.”

Daxer disagrees with the perception that some autistics lack empathy. She says empathy is merely imitating the emotions of others.

“That mirroring phenomenon is not the same as compassion,” she said. “I actually have a very high level of altruism because I care a great deal about other people. The fact that I don’t mirror their emotions doesn’t really have much to do with the fact that I’m compassionate.”

Daxer is involved with an Asperger’s support group and interacts with others “who are strange like me.”

“I say ‘strange’ as a plain fact, something that’s to be treasured because the more diversity, the better,” Daxer said. “I connect more with people who are also on the outside of society like I am because they also have the experience of connecting with people unlike themselves every day.”

Daxer was born in Munich and spent the first six years of her life in Germany before coming to the United States. She enrolled at Wright State in part because of the university’s reputation of supporting students with disabilities.

“Most colleges don’t know how to help people with disabilities, even mild ones,” she said. “Wright State is flexible enough that I could get what I needed here and I could do what I was good at without being hindered by everything I was bad at.”

At Wright State, Daxer took part in a summer research program in which she worked in Kate Excoffan’s genetics laboratory, using a virus to transfer genes into a cell line as a test of the virus’ suitability for molecular evolution.

The Summer Research Training for Minorities and Persons with Disabilities, or STREAMS, is funded by the National Institutes of Health. Students have mentors and interact with researchers, which pushes the students to socialize.

Mariana Morris, Ph.D., chair of pharmacology/toxicology and assistant vice president for graduate studies, said that when Daxer first started in STREAMS, she tended to shy away from interaction.

“Since being in that program and doing the blog and doing so many different things, she has blossomed and has changed completely,” Morris said. “I just feel really happy that that program was there and she could take advantage of it. I think it changed her life.”

Daxer says it’s important people know that autistics are human beings, even though they are different.

“It’s like connecting with someone from another culture,” she said. “We can be co-workers. We can work on projects. We’re probably going to be very detail oriented. Take advantage of that. I’m a total perfectionist.”

Daxer says society should support and advocate for all autistics, not just the ones it finds interesting, intelligent or inspiring.

Daxer says she doesn’t want a typical brain because autism is part of who she is.

“There are so many more important things than not being disabled. And being yourself is one of them,” she said. “I think differently. I am different. And my identity, the person I am, you can’t just cut out autism and leave me the same. I want to be myself, not someone else.”