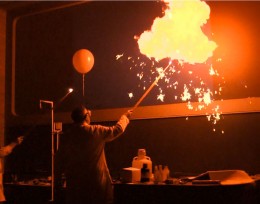 They pound nails into wood with flash-frozen apples, touch off explosions that rattle the walls, and ignite hydrogen-filled balloons that whoosh into colorful balls of flame.

Rubin Battino and John Fortman have had plenty of time to refine the Wright State Chemistry Demonstration Program. They’ve been doing it for more than 30 years.

It doesn’t always come off without a hitch.

The two burned a hole through a high school stage after showering it with sparks from molten iron. They’ve taken out ceiling lights with popped corks from bottle explosions. And they put nasty burns in brand new carpeting when a toppled torch shot burning sugar onto the floor.

But aside from the occasional glitch, Battino and Fortman present a polished, fast-moving, carefully choreographed demonstration that both entertains and educates.

“It’s a science outreach program,” said Fortman. “It’s to encourage and stimulate interest in careers in science and technology.”

Battino got the idea from a similar program at the University of Wisconsin. He and Fortman expanded and embellished the program a bit, then launched it modestly, with one show for faculty, staff and their children. It grew to three shows the second year and eventually mushroomed to two dozen shows annually.

The demonstrations target middle schoolers. National studies have shown that’s the time when many students get turned off by science and never give it serious consideration as a career. But high school students and chemistry clubs also flock to the shows.

Dressed in white lab coats and protective head gear, the two professors move along at a rapid-fire, machine-gun clip. There are no pauses. The instant Battino finishes his demonstration, Fortman launches the next one.

“We’re working with middle and high school students, and they don’t have terrifically long attention spans,” Battino said. “So there just can be no gaps. When we work together, it’s just bang, bang, bang, bang.”

The demonstrations themselves keep the students riveted to their seats. Spiraling towers of flame and billowing clouds of condensed water vapor mesmerize them. Sonic boom-like explosions produce squeals and shrieks.

And then there is the demonstration that brings down the house.

Battino plunges the thumb of his rubber glove-covered hand into a container of liquid nitrogen, moaning in pain as it quickly freezes. He pulls his thumb out and smashes it with a hammer, spraying flesh and bone on the table and then revealing a hand dripping with blood, drawing gasps from the crowd.

Turns out it is stage blood, and Battino’s “thumb” was actually sausage. But if anyone was dozing off, that put an end to it.

“I go a bit overboard on my acting,” Battino said. “John is a bit more of a straight man.”

Battino has also perfected what he calls “the chuckle,” a maniacal giggle he uses when he makes a mess or an experiment doesn’t work quite correctly.

“I’ve added that as part of my routine,” he said. “It just carries stuff along.”

Fortman and Battino explain the science of everything they do. And the demonstrations are often salted with a little history as well as the chemistry of the automobile and airplane, chemistry in movies and the science of magic tricks.

“John and I both model enthusiasm and interest and passion for what we’re doing. And that is just a big part of it,” Battino said. “If we’re not having fun while we do it, you just miss a great deal of the motivational side of it.”

When a demonstration doesn’t work — such as their hydrogen/oxygen mixture in a protectively wrapped pop bottle failing to fire — the professors call it a “hiccup” and use it as an opportunity to explain the fuel-option ratio required for combustion.

The teachers who bring their students say the students anticipate coming to the demonstrations and talk about what they’ve seen for weeks. Battino isn’t sure how much of the science the students remember or retain, but is certain that the shows make a connection.

“Live demonstrations appeal directly to the concrete operational thinking that students do,” Battino said. “Most students need concrete things, not abstract stuff on a blackboard.”