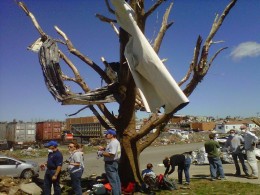 Though thousands have flocked to the disaster site since the tornado struck in May, the cleanup has only just begun.

Family photos scattered across the rubble of a destroyed house.

That’s the indelible image Ryan Hehr, Dayton Gems director of community and media relations and a recent Wright State University alumnus, will keep with him forever after returning home from Joplin, Mo.

“The photos we found scattered, the pictures of family and friends at each house, and now its completely gone. It made you wonder where those people are,” said Hehr.

Having just returned from the Missouri town that lost 142 people and 7,000 homes from a monster May tornado, Hehr says the experience was amazing.

“The trip was great, definitely a learning experience for everyone involved. It was a real eye-opener that I don’t think any of us will ever forget,” said Hehr. 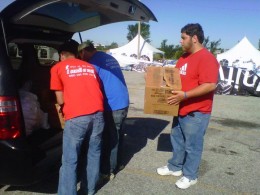 Ryan Hehr and Andy Badii help unload a church van of donations for the tornado relief effort in Joplin, Missouri.

Hehr, who travelled when he was a student to a similar disaster area in Mississippi after Hurricane Katrina hit, tapped his Wright State roots when he was searching for volunteers to join him earlier this month.

But in many ways, this trip wasn’t like his experience with Katrina, where the more they drove into the disaster zone, the worse it got.

“In Joplin, we drove into town and it was all fine and dandy, and then you just hit this wall of destruction,” said Hehr. “The whole van went silent.”

Hehr and five others, mostly recent Wright State grads connected to The Guardian, spent a full week in Joplin, staying in the dormitories at Ozark Christian College.

“The first couple of days we were out in the field picking up debris,” said Hehr. “The last two we went to a warehouse and separated donation items.”

The devastation was widespread and in many instances showed just how powerful the EF5 tornado was.

“We went by a school and we saw a piece of plywood that had been thrown so hard it was wedged into this row of lockers,” said Hehr. “It pierced the metal.”

The Wright State group brought as many donations of food and clothing as they could fit in the van for the trip and found that thousands of other people had done the same.

“When we were separating donations, the biggest thing donated were clothes and food, but people even sent partially used bottles of soap or lotion, clearly whatever they had available,” said Hehr.

Hehr says it was a lot of hard work but, fresh off graduation, his group felt it was important to join the effort in Joplin before coming home and starting their job-search effort.

“It was just something they all wanted to do before they started working and weren’t going to have the same freedoms as they did as a student,” said Hehr.

Once a vibrant small town, Hehr says images like this are common in the disaster zone.

American flags were placed at each of the nearly 7,000 homes destroyed by the tornado.

Ryan Hehr, Director of Community and Media Relations for the Dayton Gems and a recent Wright State grad, organized the trip.

This Joplin school was destroyed. Inside volunteers found plywood blown so hard it was wedged into a row of metal lockers.

Though thousands have flocked to the disaster site since the tornado struck in May, the cleanup has only just begun.

Ryan Hehr and Andy Badii help unload a church van of donations for the tornado relief effort in Joplin, Missouri.