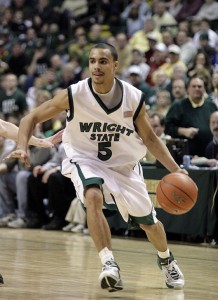 DaShaun Wood played well during Wright State’s 77-65 victory over Butler at the Nutter Center in Dayton, Ohio in 2007.

The former 2007 Horizon League Player of the Year has been playing in Europe with Germany’s Basketball Bundesliga club, Skyliners Frankfurt. Wood was named MVP of the team in 2011.

In his senior year, Wood led the Raiders to the Horizon League championship and its second-ever appearance in the NCAA tournament. That year, Wood was the league’s top scorer during the regular season and Player of the Year, the first Raider to achieve that feat.