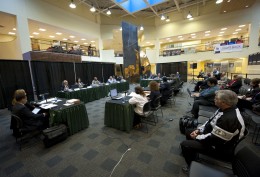 The Ohio Civil Rights Commission heard an appeal of a housing discrimination case, a sexual harassment case at a restaurant and a request by a hair salon to create a classification of jobs that could only be filled by female workers.

Students at Wright State University not only got a rare chance to see the Ohio Civil Rights Commission in action; they also got some career tips.

The five-member commission held a public hearing in the Student Union Atrium on April 26, collecting testimony in three different cases from around the state.

Executive Director G. Michael Payton said holding the hearing outside of Columbus was designed to bring the government to the people. He said coming to Wright State also gives the commission a chance to help educate future leaders.

“It’s completely compatible with the leadership principles you’re teaching here,” Payton said, adding that many students will likely be business leaders and face issues of diversity in a diversified world.

“Those who are able to navigate that are going to be successful,” he said.

The commission heard an appeal of a housing discrimination case, a sexual harassment case at a restaurant and a request by a hair salon to create a classification of jobs that could only be filled by female workers.

The commission employs about 80 investigators and others statewide, with the staff members coming from a wide variety of educational backgrounds and fields. Each investigation takes generally between seven and 10 months on average.

Prior to the hearing, Desmond Martin, the commission’s director of enforcement and compliance, offered advice to a group of Wright State students who might be considering careers as civil-rights investigators. Martin first became involved with the commission when he received an internship while a senior at the University of Akron. He later became an investigator.

“If you get an internship somewhere, that’s the best thing you can do for yourself,” he told the students.

Following the hearing, the commission presented Wright State with a Civil Rights Leadership Award of Excellence for the university’s support of civil rights and for being one of Ohio’s most accessible universities for disabled persons.

The panel also presented Farmer and Ramos with Civil Rights Leadership Awards of Excellence. Ramos served on the commission for 18 years. Farmer has been a strong supporter of civil rights and of the commission.

Commission Chair Leonard Hubert said the panel was delighted to come to Wright State, which he said is well known for promoting equality and supporting research on the causes and effects of discrimination.

“This forum allows us to present real cases that demonstrate the complexity of discrimination and the harmful effects it has that are often not discussed in the classroom, but are experienced in our everyday lives,” Hubert said. “We hope this experience will inspire a healthy discussion amongst students that serves to eliminate barriers to equality, promote diversity and encourage inclusion in our communities.”

The quasi-judicial, administrative state agency receives about 5,000 cases of discrimination complaints a year, primarily in the job and housing areas. It also develops educational programs for students and other residents designed to help eliminate prejudice, its harmful effects and its incompatibility with American principles of equality and fair play.

“This is a unique opportunity for students, faculty, staff and the community to see firsthand how Ohio views violations of individual civil rights,” said J. Michael Bernstein, assistant dean at the Raj Soin College of Business. “The college is fortunate to have this opportunity to bring the hearings to our campus, as we are one of the few universities in the state that the commission visits during the year.”