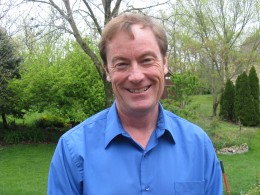 Tarpey’s research has been heavily focused on biostatistics, which is used in medical research such as in the analysis of treatments. He is currently trying to help develop biostatistics curriculum and resources at Wright State.

Odds are that Wright State professor Thaddeus Tarpey would land in the statistics hall of fame sooner or later. Looks like sooner.

Tarpey, Ph.D., was elected by the American Statistical Association as a Fellow of the Association for his outstanding professional contributions to and leadership in the field of statistical science.

“It means a lot,” Tarpey said. “It’s like you’ve reached the pinnacle in some ways of your profession, and you’re being recognized for it.”

One of only 48 members worldwide elected as Fellows, Tarpey was recognized for his influential contributions to statistical research and applications, particularly in the areas of multivariate analysis.

A fundamental branch of statistics, multivariate analysis involves multiple variables that correlate with each other, such as height, weight, waist size, skull size, etc. Such analysis is used in the sizing of clothing or protective gear, for example.

Tarpey’s research has been heavily focused on biostatistics, which is used in medical research such as in the analysis of treatments. He is currently trying to help develop biostatistics curriculum and resources at Wright State.

Tarpey grew up in Lexington, Ky., and obtained his bachelor’s degree in math from the University of Kentucky. He later got his master’s and doctorate degrees in math from Indiana University.

Between degrees, Tarpey worked as a bicycle courier in San Francisco, darting through traffic and trying to avoid being “doored”—clobbered by doors being opened from parked vehicles. Today, he bicycles regularly to Wright State from his Yellow Springs home, a round trip of 22 miles.

The American Statistical Association (ASA) is the nation’s preeminent professional statistical society. The 2012 Fellows are from 18 states and six countries.

“The 48 individuals honored as 2012 Fellows represent an extraordinary set of accomplishments within the field of statistics,” said Robert N. Rodriguez, ASA president. “Their selection as Fellows signifies that they and their work have earned the admiration of their peers, and I congratulate them on behalf of our association.”

The designation of Fellow has been a high honor in ASA for nearly 100 years. Each year the Committee on Fellows can elect no more than one-third of 1 percent of the total ASA membership as Fellows.

Individuals are nominated for the honor by association members and must have an established reputation and made outstanding contributions in some aspect of statistical work. Weight is given to publications, positions held by the candidates in the organizations in which they are employed, activities within the association, membership and accomplishments in other societies and other professional activities.

The Fellows will receive their certificates at a July 31 ceremony during the annual Joint Statistical Meetings in San Diego.

The ASA, a scientific and educational society founded in Boston in 1839, is the second oldest continuously operating professional society in the United States. For more than 170 years, ASA has been providing its 18,000 members serving in academia, government, industry and the public with information about statistics. It serves statisticians, quantitative scientists, and users of statistics in a wide range of areas.