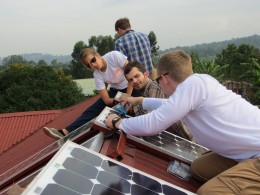 When a group of Wright State engineering students went to central Africa for a project in June, they pretty much accomplished what they expected to—brought solar power to a medical clinic in Uganda and established ties with a university in Rwanda.

But there were a few surprises along the way.

For example, the students—Ginny Hall, Nathan Adams and Eric Geise—were persuaded by a Ugandan woman to star in her music video.

“I got dressed in traditional Ugandan dress, what you would wear if you were getting married,” Hall said. “We danced. We walked around the complex. We could be showing up on YouTube.”

It was all part of the cultural experience that went hand in hand with the engineering project.

Thomas Hangartner, Ph.D., chair and distinguished professor at Wright State’s College of Engineering and Computer Science, developed the overseas project to expose students to both engineering work and foreign culture. 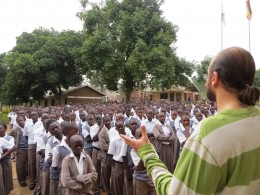 The focus was on the medical clinic at a Catholic education center in the Ugandan village of Bombo.

The clinic was plagued by frequent power outages, which could result in the loss of important blood samples and lab specimens that needed to be kept refrigerated. The solar system was needed by the clinic as a backup to ensure a constant source of power.

“The grid power is so unreliable there. It went down multiple times while we were there,” said Adams, a computer science major. “Any tests that they had going could be ruined.”

Before leaving Wright State, the students ran calculations to determine how many solar panels would be needed to produce the necessary voltage. They designed a system and determined what supplies would be needed when they arrived.

With the help of some Ugandan vocational students, the Wright State team spent 2.5 days mounting six solar panels that produced a total of 20 volts. They also installed a regulator that kept the flow of electricity constant.

“I didn’t know how to do any of this before I got there,” said Hall, a biomedical engineering student from Grove City. “The whole thing was kind of difficult for me, but I felt like I learned a lot from the experience.”

The group also debugged computer equipment and software, boosting protections against computer viruses and power surges. And they added electrical switches to a church, which allowed for the safe and easy transfer to a backup generator.

The group also spent several days in Ruhengeri, Rwanda, where they met with officials at a university there.

But the group also soaked up the culture, which they found wildly and refreshingly different from that of the United States.

They were revered by the Ugandan children, did some splashing in the Nile River, starred in the dance video and devoured the food.

“It seemed every piece of chicken was slaughtered specifically for dinner, every glass of milk was milked fresh for us to drink, and the little goat that was there one minute and on the grill 10 minutes later,” Kashou said.

There were also surprising cultural similarities, such as an interest in basketball and rap music.

“I was kind of amazed at how far-reaching American culture is,” said Geise, a biomedical engineering student from Beavercreek. “Even in Uganda, the kids are listening to Lil Wayne, 50 Cent, Nicki Minaj.”

The students said the Ugandans have a more relaxed attitude about life and even poked fun at the Americans’ frenetic pace.

“The most difficult thing for me personally was slowing down and not running a mile a minute for everything,” Adams said. “Our traditional American experience is so fast paced.”

“I really liked that we got to see some of real Africa,” she said. “I’m pretty sheltered to the world. That’s something I don’t want to come back from. I want to keep moving forward, seeing those issues and maybe going back and helping with those.”

Geise said the trip reinforced his desire to make the Peace Corps or United Nations volunteer work possibly part of his future.

Hall said the trip inspired her to take her career on a clinical path.

“I want to do something with patients,” she said. “And I want to be in some kind of career where I actually go somewhere that has needs and can help.”