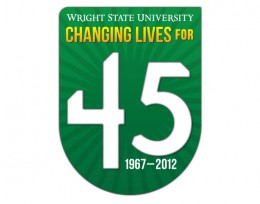 Three university presidents appeared on the same stage during a celebration of Wright State’s 45th anniversary to salute the birth of the university and forecast the future of higher education.

Wright State has since grown from a one-building campus to a shining star among Ohio universities, boasting two campuses totaling 730 acres and populated with more than 60 buildings.

“We’re pleased to have our parents here today,” Hopkins quipped to Gee and Hodge. “Today, look at us. Look what we’ve done and look what you’ve done and what we’ve become. We’re quite proud of that.”

The audience was treated to a video chronicling the history of Wright State, a musical salad of photos that showed construction, studying students, sports, campus art, commencements and other highlights.

“You’ve also become very much part of the economic engine of this region,” Hodge said. “People look to Wright State to provide ideas and to provide a workforce that helps to propel the region forward.”

Gee said that in order to meet the challenges of the future, higher education must have a laser-like focus on the students, make college more accessible and provide research opportunities. In addition, it must adapt to change, shake off complacency, be innovators and the producers of ideas, he said

Hodge said universities will have to provide multiple pathways to careers because more students will have different starting points. In addition, he said there must be more bundling of educational activities, whether it be online learning or handling students who take classes at multiple universities to get the same degree. He said there will be more emphasis on student outcomes, more collaboration between universities, a greater commitment to internships and greater use of technology.

Members of the audience threw some questions at the presidents, including how can universities collaborate and compete for students at the same time and what’s been done to embrace online learning and make college more affordable.

But much of the celebration was a look at Wright State’s past.

Math professor Marc Low arrived in 1964 and spent his entire professional career at the school.

The birth of Wright State was helped by then-Gov. James Rhodes’ effort to place public higher education facilities within 30 miles of every Ohioan.

At the time, Dayton was a high-technology center with a special need for a highly developed labor force. Community leaders mounted a private capital-fund campaign to secure a joint branch campus for Ohio State and Miami that could be converted into a unified state university.

The campaign included contributions from thousands of manufacturing employees in weekly or monthly payroll deductions that lasted up to four years. By June 1962, more than $6 million in cash and pledges had been raised.

The seeds for Wright State were planted in a pasture 12 miles northeast of downtown Dayton. The chosen site had plenty of room for expansion, highway access and was close to Wright-Patterson Air Force Base—a dream come true for Air Force planners thirsting for a nearby university.

A man by the name of Henry Bader went from farm parcel to farm parcel, buying land totaling 428 acres at a cost of about $756,000. Groundbreaking occurred May 31, 1963—a clear, bright day that had the musical instruments of the Air Force band sparkling in the sunlight.

Barlow said the first class he taught was in a classroom that was still under construction. He said he would teach a little and then stop so the construction workers could install ceiling tiles. Then he would start teaching again.

Wright State featured a cosmopolitan faculty and a student body peppered with older, non-traditional students. Its success was built on the brains and work of thousands of alumni who became the first member of their families to graduate from college.

Many of these students turned their hard-won degrees into jobs in the stratosphere of their chosen professions. To date, Wright State has produced nearly 100,000 graduates.

(Much of the information in this story was gleaned from the book Founding and Fulfillment: Wright State University 1964-1984 by Charles W. Ingler.)