Student sees herself in Latino youths 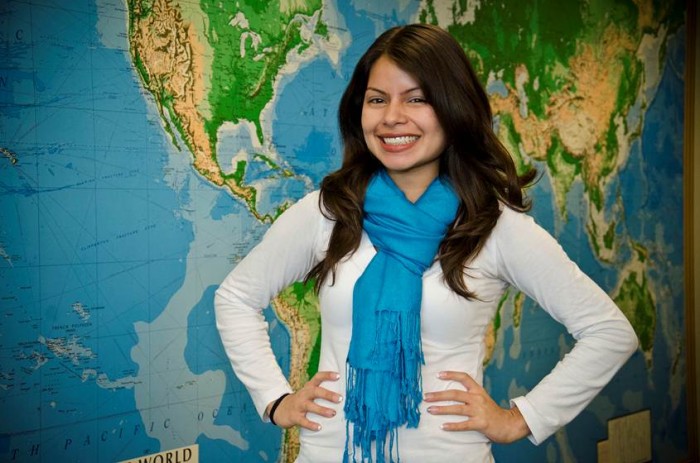 Kathryn Brown currently attends Wright State University full time and has a full-time job at Children’s Medical Center, where she manages medical information and the release of patient records.

Mentoring Latino teens sends volts of motivation through Wright State University student Kathryn Brown, who at age 27 is within two semesters of being the first in her family with a college degree.

Brown was born and raised in Dayton, but is of Mexican heritage. She volunteers at the League of United Latin American Citizens, which operates a learning center for Latinos in Dayton public schools to tutor them, help them with their English and encourage them to stay in school.

“I see myself in them. I see them struggling, and I feel like I’m still kind of struggling to get finished,” Brown said. “I see these kids, and I see so much potential in them.”

Brown was raised by a single mother, who worked two jobs—at Miami Valley Hospital during the day and at a call center at night—to send her daughter to Chaminade Julienne Catholic High School in Dayton.

Brown said that since no one in her family had gone to college, the emphasis was always on getting a job after high school rather than pursuing a college degree. At Chaminade Julienne, she was told that 98 percent of the students there go on to college or are otherwise high achievers.

After graduating in 2003, Brown worked a full-time job, but also took classes at Sinclair Community College. She moved to Fort Lauderdale, Fla., where she worked and attended a community college. Then she returned to Dayton because it felt like home.

Brown currently attends Wright State full time and has a full-time job at Children’s Medical Center, where she manages medical information and the release of patient records.

“It’s tiring because I work all day and then I’m here until 9 o’clock at night most nights,” she said. “But I just try to look at the bigger picture—that it will be worth it.”

Brown said that when it came to balancing school and work, the need to earn money was always the priority.

“So if the class schedule didn’t work out with the work schedule, then sorry, I was going to choose work,” she said. “In some cases I guess that’s almost still true today. I have to pay my bills. I just hope that it doesn’t get to that point where I would have to choose.”

Brown is majoring in international studies because she wants a career related to diversity and/or public service. Her naturally inquisitive nature coupled with a pride in the military has her setting her sights on being an analyst with the National Air and Space Intelligence Center at Wright-Patterson Air Force Base.

Brown said she loves the diversity of Wright State.

“That’s a huge deal,” she said. “I’ve had a good experience as far as professors, counselors. Any time I had a question about anything, I felt welcomed and didn’t feel like I was a burden.”

Brown says her role model is Tony Ortiz, Latino community liaison for Wright State and member of the Ohio Commission on Hispanic/Latino Affairs.

“He’s done so much for the community, so I’m just kind of following his lead,” she said. “He’s almost like the president of the Latino community.”

Brown also volunteers with the Puerto Rican American and Caribbean Organization, a local group that distributes turkeys at Thanksgiving and gifts to children at Christmas, and stages the annual Hispanic Heritage Festival.

Brown says people need to appreciate and respect that Latinos are the fastest-growing minority population. But she says Latinos also need to step up to the plate.

“We have to succeed and do better than our parents did,” she said.

Brown says she appreciates Dayton and what the city represents, noting that it was recently named an immigrant-friendly city.

“I can remember when I was younger going to grade school being the only brown person,” she recalled. “It wasn’t always the best experience, but look at kids now and it’s so much more diverse. I see how much Dayton has changed. It just makes me happy, and I want to make sure that it continues.”