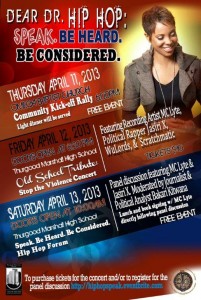 A hip-hop social/music forum designed to engage young adults in non-violence efforts is on tap thanks to Wright State University’s Bolinga Black Cultural Resources Center and the City of Dayton Human Relations Council.

The event grew out of a series of community discussion forums called Speak, Be Heard, Be Considered aimed at improving relations between the community and the police and identifying effective strategies to reduce crime and disorder.

The April 11 to13 events are designed to reach young adults in the community through hip-hop and encourage them to become activists and advocates for non-violence and other societal concerns.