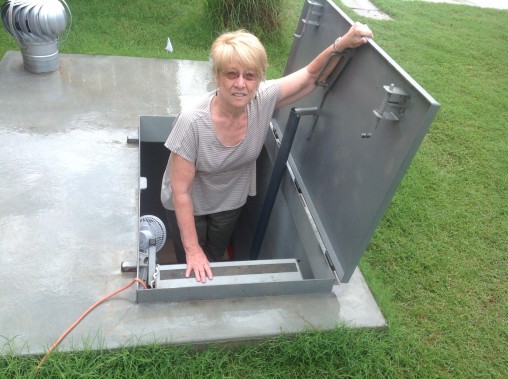 Huddled in a tiny concrete bunker in Moore, Okla., with her daughter and grandchildren, Wright State University staffer Barb Cwirka could hear only the soft whir of a ventilation fan.

Above ground—not far away—a monster tornado was taking the city apart, vaporizing homes and blowing entire neighborhoods off the map.

The killer storm—a rare, most powerful EF-5–would leave 28 people dead, 237 people injured, destroy or damage 13,000 homes, and cause as much as $2 billion in damage.

“The one thing that is absolutely remarkable to me is the outpouring of the community,” said Cwirka, program coordinator for Wright State’s Department of Kinesiology and Health. “There are roofing companies patching roofs for free. The University of Oklahoma has donated all of the dorms so you can live in them for free. Pizza places are delivering pizza for free.”

Cwirka had arrived in Moore two days before the tornado to visit her daughter Michelle, a realtor who lives there with her husband and three teenaged children. 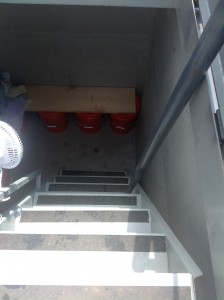 When tornado sirens began going off the next day, the family bolted out to the yard and scrambled down into their underground shelter, a five-by-seven-foot bunker sealed on top by a heavy iron door. The group stood shoulder to shoulder until the danger passed.

The next day—expecting more dangerous weather—Barb and Michelle went to a hardware store and bought five-gallon buckets and pieces of wood to construct makeshift seats for the shelter that could also be used as containers for towels, first-aid kits and important documents.

As they were returning to the store to buy one more item, Michelle received a telephone call from her husband, Rodney, who was at work on the other side of town and saw the developing storm.

“He was frantic,” Michelle recalled. “He said, ‘You have got to get underground. Get the kids and get home.”

Michelle and Barb sped off to the junior high school and picked up Logan, 14, and Cameron, 13. However, there was no time to go to the high school and get Morgan,18, whose cell phone had died.

“We’re kind of getting panicked,” said Michelle. “Just as we get to our shelter the tornado sirens are going off.”

The group huddled around a radio. Broadcasters were reporting the path of the tornado street by street.

“From the sound of it, it sounded like it was coming right at us,” Michelle said.

A teenaged girl who is a family friend had joined the group in the shelter. Her father had taken refuge by driving his truck into a nearby self storage unit. He was pinned to the floorboard as the storm crumpled the unit’s steel skeleton.

He sent a frantic text message to his daughter: “I’m in the storage building. I’m going to die. I love you.”

Meanwhile, Michelle was thinking about the 1999 tornado in Moore. It was the most powerful tornado ever recorded in the United States, with winds of up to 302 miles an hour. A total of 36 people died in that storm.

Michelle, her family and others were in a bunker that time, too.

“We had to be dug out,” she recalled.

This time, the tornado brushed by the family, leaving them unharmed and the house untouched. As they emerged from the bunker and raced to the high school to find Morgan, they found a moonscape.

“It was a war zone,” Michelle said. “Houses were just gone. People were coming out of their homes covered with mud. Pieces of insulation were everywhere.”

Morgan and Rodney, both uninjured, were happily reunited with their family, as was the father of the family friend.