But that confidence and comfort springs from the work of sanitarians—environmental health professionals and inspectors who ensure that food is sanitary, who protect the air and water and who control disease.

“I just knew that public health was what I wanted to do and what I was committed to,” said Deak, who graduated this spring with a bachelor’s degree in environmental health from the College of Science and Mathematics’ Department of Earth & Environmental Sciences. “It’s interesting to me because it’s a field job. I won’t be behind a desk. And it’s really helping to protect the public from the places they come into contact with the most.” 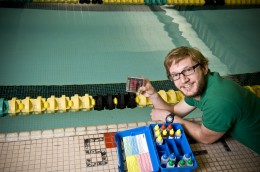 Deak’s interest in public health grew out of his passion for the environment. That passion was fueled by his mother, who taught chemistry and honors anatomy and zoology at Lakota East High School.

“My mom being that science teacher, I always grew up knowing that this is what nature is, this is how important it is, this is why it’s valuable,” said Deak, who loves hiking, kayaking and gardening. “I’d always gone to the zoo and learned how important wildlife is.”

Deak enjoyed his time at Lakota East. Although his class was large—about 650 students—Deak knew many of the teachers because of his mother and “wasn’t just another face in the crowd.” He also excelled on the lacrosse field, playing on the school’s first lacrosse team his junior year and ascending to varsity captain his senior year.

After graduation, Deak enrolled at Marietta College. But he quickly transferred to Wright State and jumped on the environmental health track.

“The program is great here. It’s taught primarily by adjunct professors, who have jobs during the day,” Deak said. “I found that to be very helpful because I got to see hands-on experience from people who are in the field right now. This is the cutting edge; this is what literally happened earlier today in the field, and I got to see exactly what that was like.”

“That provided a lot of interaction with professors, which is what I like,” he said. “If I have questions, I can ask them. I’m not just a number on a list. I’m somebody to them. They know who I am.” 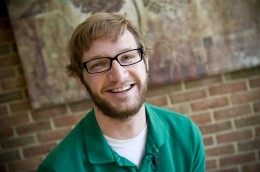 Deak’s interest in public health grew out of his passion for the environment. That passion was fueled by his mother, who taught chemistry and honors anatomy and zoology at Lakota East High School.

Another career-boosting move came when Deak got involved in Chi Alpha Campus Ministries and became a Christian.

“That really changed my life, changed who I am,” he said. “And it really just helped me get the confidence to achieve what I needed to do to become a sanitarian.”

“When one goes out to eat, they are expecting that the food they’re eating isn’t contaminated with salmonella or something—and I want to make sure that’s the case,” Deak said. “People go to a swimming pool and they expect that it’s clean. We need to make sure the pool has the right chemicals to keep it clean. My dream job is to be a registered sanitarian in Ohio, which would be going out and doing those inspections in the field.”

In early June, Deak took a position at a Sanitarian-In-Training with Greene County Combined Health District.

Inspection jobs require a bachelor’s degree and registration by the State Board of Sanitarian Registration. If Deak passes the board’s state exam to be a registered sanitarian, he will be able to do full-time inspections on his own.

Deak said Wright State helped get him to where he is today.

“I feel very prepared to go out into my field and succeed,” he said. “I’m going to take what I’ve learned at Wright State and give it back to the surrounding area.”