She’s interned at Duke and will soon be at Yale. But Anna Zamora’s heart will always be at Wright State.

“Wright State has been a huge facilitator for the rest of my life,” said Zamora, who just graduated with a bachelor’s degree in sports science. “I’ll be forever grateful for what they were able to give me in the classroom and out of the classroom. I could go on for days because they’ve done so much for me.” 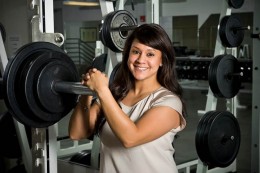 Anna Zamora earned a degree in sports science, exercise physiology at Wright State and is poised to join Yale University as a strength and conditioning coach.

Life for Zamora has recently been a blur.

“I’ve got a full plate, but I’m looking forward to it,” she said.

Zamora grew up in the shadow of Wright-Patterson Air Force Base, where her father was an Air Force tech sergeant. She graduated from Stebbins High School, where she played soccer and was a cheerleader.

Zamora enrolled at The Ohio State University, but transferred to Wright State because she preferred a smaller campus closer to home. Then she took a break from school for a few years and worked at a bank.

Some friends got her interested in strength and conditioning for college athletics. 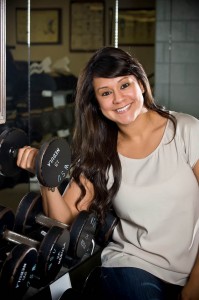 Zamora grew up in the shadow of Wright-Patterson Air Force Base, where her father was an Air Force tech sergeant. She graduated from Stebbins High School, where she played soccer and was a cheerleader.

“I decided I wanted to pursue a career I had fallen in love with, and I knew I needed the right degree to do that,” she said. “I decided that sports science, exercise physiology was the direction I wanted to go.”

So Zamora returned to Wright State in 2010 and joined the military as a way to help her pay for her education.

“I decided the Army National Guard would be the best bet for me to finish my degree and still allow me to come out with not as much debt and also provide me an income while I was in school,” she said.

She was assigned to the 371st Sustainment Brigade in Springfield, a unit with a storied history.

The brigade’s transportation, MP and water purification units were mobilized for Operation Desert Shield/Desert Storm. And the brigade was in charge of staging and onward-movement operations for much of Kuwait during Operation Iraqi Freedom 1.

Zamora decided to become an officer and opted for Army ROTC. She took part in numerous field-training exercises, community events and went to leadership training at Joint Base Lewis/McChord in Seattle.

“ROTC has been an awesome experience and a great networking opportunity and provided me a lot of experience to help me get through school,” she said.

“It’s been a long, hard road, but it’s been absolutely amazing, every step,” she said. “The classes were pretty hard, but the program is full of great teachers.”

She said Wright State allowed her to do distance learning while she interned at Duke, which was critical to her getting her degree in a timely manner.

Zamora’s advice to students interested in sports science is to tap into that passion and keep their eyes on the prize.

“The opportunities are out there,” she said. “It’s just a matter of staying connected, knowing what your options are and putting yourself out there.”