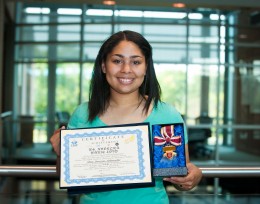 Angie Loyd displays the certificate and medal she was given after being named a Wright State junior Best American Ambassador.

Angie Loyd will tell you that being an effective ambassador is not all that complicated. Sometimes all you need is a gentle word and a smile.

“When you have a group of people spending all day together who are hot and sweaty and always hungry, the tension can build up pretty quickly,” Loyd said. “Sometimes you just need someone to tell a joke or say, ‘Let’s switch seats,’ or, ‘Hey, it’s OK, we’re all feeling that way.’ Sometimes you need to be the one to step in and maintain the peace.”

Loyd’s skills at maintaining the peace were certainly recognized by the other 27 college students who took part in the Summer Ambassador Program to Japan from June 23 to July 17. Those students named the Wright State junior Best American Ambassador.

“Angie truly stood out,” said Raj Soin College of Business associate professor Shu Schiller, Ph.D., who organized and led the trip through the University Center for International Education. “She is a very good student who always pays attention, who talks to people, and who always wears a beautiful smile. She’s a very sweet person. When they chose her for this award, I was not surprised.”

The Beavercreek High School graduate was one of 10 Wright State students to take part in the trip to Japan. Others came from the University of Findlay and two universities in Brazil.

“I’m trying to learn as much as I can while I figure out where I can make the biggest impact,” Loyd said. “One thing I have learned is that international conflict is often the product of misunderstanding or misinterpretation. Working to avoid those things on an individual basis helps create better relations for our countries as a whole.”

The students spent some their overseas trip with host families.

“One family I stayed with was very active and outgoing, in their 30s with three kids,” Loyd said. “The other couple was very conservative, in their 50s, and had lived in Philadelphia at one time. It was very interesting to hear their stories and learn about the culture through them.”

The remainder of the time in Japan was filled with sightseeing, interaction with local people and communities, observation of information technology tools and fulfilling requirements for an online class.

“We live the culture,” Schiller said.

Loyd received a medallion and certificate for being voted Best American Ambassador by the other students.

“It was a big surprise, a nice surprise, and a very beautiful compliment,” Loyd said.