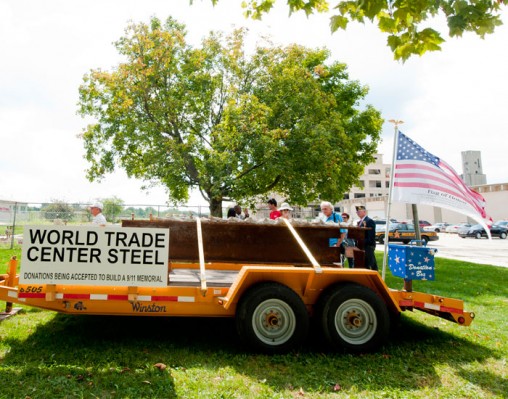 A piece of steel from the World Trade Center will be used with Fairborn’s 9/11 Memorial Monument.

Members of the Wright State family will pause to remember those who died during the 2001 World Trade Center attack and to dedicate new construction at Fairborn’s 9/11 Memorial Monument during a ceremony Sept. 11.

The event will take place at 8:30 a.m. at the 9/11 Monument site at Calamityville, the National Center for Medical Readiness, 506 E. Xenia Drive. The ceremony is open to the public.

Phase II of the monument project was recently completed. A 12.5-foot steel artifact from one of the Twin Towers is part of the site. The most recent improvements consist of a pentagon-shaped base around the monument and concrete paths that connect the monument to two reflection circles.

Pastor Ruth Paulus and American Legion chaplain Roger Sloan will give the invocation and benediction, respectively. The ceremony will conclude with the American Legion Post 526 Salute to Fallen Comrades and Taps as well as bagpipes by Montgomery County Sheriff’s Office retired sergeant Del Braund.

Parking will be available at the Eagles Lodge, across from Calamityville. Those wishing to donate to the memorial monument fund can contact the Fairborn Chamber of Commerce at (937) 878-3191 or chamber@fairborn.com.