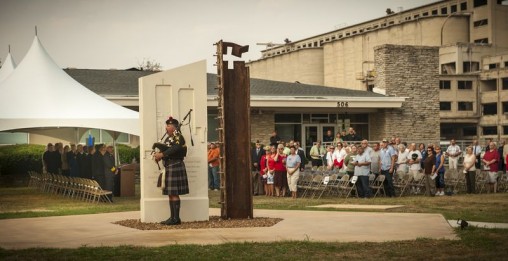 Rufus Smith remembers well the events of Sept. 11, 2001. In fact, Smith is reminded of it every day he comes to work.

The retired brigadier general is the new director of Calamityville, the National Center for Medical Readiness administered by Wright State University. Smith was among those who participated in the city of Fairborn’s annual 9/11 Memorial Ceremony Sept. 11 near the 9/11 monument in front of the Calamityville headquarters.

“There couldn’t be a better location for this memorial, one more directly related to our mission, than right here,” said Smith, who began work for Wright State on Aug. 27. “We are here to make sure first responders are ready for their worst day; this monument and this ceremony help remind us how important that training can be.” 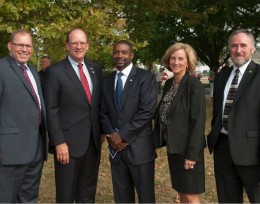 A 12.5-foot steel beam from one of the fallen World Trade Center buildings is the memorial’s centerpiece. Phase II of the project was recently completed. It includes a pentagon-shaped base for the beam and adjoining concrete marker as well as walkways and paving stones connecting that area to a pair of circular “reflecting” areas.

Monument committee co-chairs Marilyn McCauley and Dave Reichert were among those who spoke at the morning ceremony while the flag on the facility’s grounds flew at half-staff.

“There are 4,255 Greene County residents who were deployed to Iraq and Afghanistan between May 2001 and May 2012, more than any county in Ohio,” McCauley said. “This monument helps remind us of the impact that terrorist attack had, and continues to have, on America.”

Smith was among the National Guard officers dispatched to various airports when the nation’s military were placed on high alert following the 2001 attacks.

“He has led civilian-military response to disasters like Hurricane Katrina,” said Wright State Vice President for Research Robert Fyffe, Ph.D., who introduced Smith at the ceremony. “We are so pleased to have him with us.”

Smith said negotiations for the transfer of the Calamityville land from the city to the university have concluded and the university’s Board of Trustees is considering the tentative agreement.