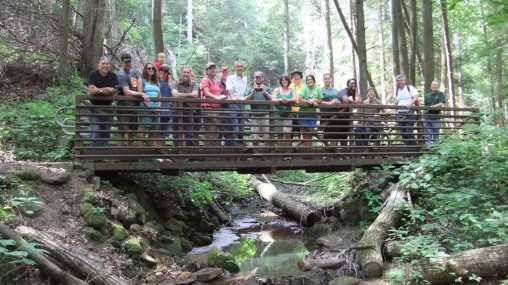 The 18-member group included not just Wright State students but also geologists from the Ohio Department of Natural Resources, the Ohio Environmental Protection Agency and consultants for environmental firms.

When it comes to field trips, students are normally the ones being led. But a group of Wright State University environmental/geology students turned the tables on that concept when they won the honor of leading a field trip for a group of professional geologists.

The students, from the College of Science and Mathematics’ Department of Earth & Environmental Sciences, organized and led the trip to Hocking Hills State Park on Aug. 17 for members of the Ohio section of the American Institute of Professional Geologists. The 18-member group included geologists from the Ohio Department of Natural Resources, the Ohio Environmental Protection Agency and consultants for environmental firms.

“We had a major organization that wanted us to put this together and be able to present it,” said student Randy Mickle of Washington Court House, who works as a seasonal ranger with the Army Corps of Engineers at Caesar Creek Lake. “It was just like we were colleagues, side by side instead of mentor/student. This was really a good experience to see how they operate as well.” 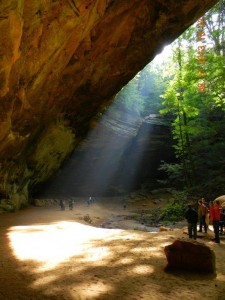 The park is filled with gorges and recessed caves, all carved out of sandstone 14,000 years ago by glacial meltwater.

Greg Geise, a master’s student angling for a career in the geospatial intelligence industry and who is president of the Wright State chapter of AIPG, said the group settled on Hocking Hills because of its high concentrations of geologic features.

The park is filled with gorges and recessed caves, all carved out of sandstone 14,000 years ago by glacial meltwater.

“You have a bunch of river delta sediment that is about 150 feet thick, 300ish million years old,” said student Paul R. Downing of Cincinnati. “Water has eroded through various weaker layers of it, creating overhangs and caves.”

The group made stops at Old Man’s Cave, Ash Cave, Conkle’s Hollow and the Rock House. At each stop, one of the students would explain the geology and history of the site.

“We’re kind of being tested as students—future geologists or environmentalists,” said Downing, who is hoping for a career in geophysics centered around earthquakes, volcanoes and the like. “If you put us all together, you would have a really good working environmental/geological history of Ohio.”

Student Ashlynn Boedecker of Cridersville said the trip underscored for her that life is more than just school.

“You learn what you can really do with your degree in the real world,” said Boedecker, who will soon join the U.S. Navy and be trained in the operation of nuclear reactors on submarines. “You learn you can apply it so many different ways than one would normally think.”

The faculty adviser for the trip was Wright State instructor Stacey Hundley, Ph.D. Robin Roth, who works for the Ohio EPA, served as the liaison for the students with AIPG.

In addition to the student chapter of AIPG, there are two other environmental/geology clubs at Wright State—Students for Earth and Environmental Sustainability or SEES; and SGE, a geologic honor society.
http://science-math.wright.edu/earth-enviro-sciences