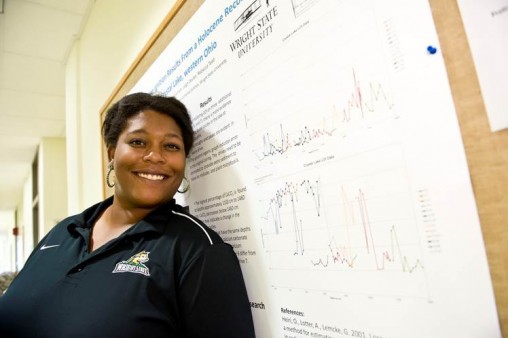 Elizabeth Freeman, who plays rugby on a Dayton team in her spare time, believes that some women veer away from geology in part because the field is perceived as a gritty, get-your-hands-dirty career more suited to men.

As a young girl, Elizabeth Freeman would carve up creekbeds looking for fossils. While her mother was studying at Wright State University, 7-year-old Elizabeth would visit campus classrooms and offices to look at fossil fish or spend time in the library reading about geology and archaeology.

Today, Freeman is on the verge of realizing her childhood dream—getting a college degree in earth and environmental sciences. And to make it even sweeter, the Wright State senior has been selected to make a presentation at the Geological Society of America’s national conference in Denver. 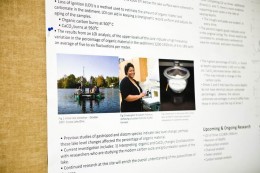 The number of women in the undergraduate degree programs at Wright State that focus on earth sciences has been increasing in recent years. Overall, 59 percent of the students are men and 41 percent are women.

“There is a place for geology; it’s very applicable,” Freeman said. “I want to see more people—male and female—getting into it. We need to cultivate kids who want to be scientists.”

Freeman’s college career was interrupted when she contracted mononucleosis and was forced to drop out. For the next three years, she worked to save money to finish college and then returned. She credits much of her success to the faculty in the College of Science and Mathematics’ Department of Earth & Environmental Sciences.

Elizabeth, who plays rugby on a Dayton team in her spare time, believes that some women veer away from geology in part because the field is perceived as a gritty, get-your-hands-dirty career more suited to men.

“What she is best known for is being that girl who comes to the dig in full makeup and carrying a purse,” said Olivia. “She wants to let people know that you don’t have to be all baggy pants and sweatshirts to be a scientist.”

Another reason some women don’t think of geology as a career choice is because there are few strong role models for them, Elizabeth said.

“I had a long, tough road and I made it; and they can make it too,” she said. “You have to just tell people it’s possible. There are women who I think would be great scientists. Why don’t we celebritize scientists, as they really should be anyway?”

The number of women in the undergraduate degree programs at Wright State that focus on earth sciences has been increasing in recent years. Overall, 59 percent of the students are men and 41 percent are women.

Freeman’s geology career got a boost last year when she was volunteering at a geology conference in Charlotte, N.C., and met Mark Leckie, a professor of micropaleontology at the University of Massachusetts. Leckie is a well-known authority on forams, single-celled organisms that as microfossils can accurately give the dates of rocks and reveal a lot about the ocean-climate system. Sensing Freeman’s enthusiasm, Leckie encouraged her to apply for an internship in Amherst to help him with foram research.

“It was definitely an honor to even be selected for something like that,” Freeman said. “He was very nurturing in that he saw I had a passion for this and he’s trying to get me to where I want to go. All of his students go on to do something. That’s kind of promising.”

During the internship, Leckie was helping a colleague who had discovered in Big Water, Utah, the fossilized bones of a pliosaur, a sea serpent-like reptile that lived at the same time as its dinosaur cousins and swam in the great inland sea of what is now the American West. Leckie was using foram data to determine the environment in which the pliosaur lived and handed off the categorizing of core samples to Freeman.

“It is definitely going to shed some light on the paleo environment, which is really big,” said Freeman.

As a result, Freeman submitted an abstract that she co-wrote with Leckie for presentation at the GSA’s conference in Denver on Oct. 29. The abstract was accepted, and she will present a poster summarizing their research. Their findings suggest that the pliosaur thrived despite fluctuating oceanographic conditions.

Leckie said Freeman learned a lot in a short period of time and generated original data that will be presented at the conference.

“This was an important step in moving on to grad school and honing her scientific skills and research interests,” Leckie said.

Freeman’s career goal is to be a research geologist involved in ocean projects. And she has a burning desire to go to Antarctica.

“It’s the last frontier, and it’s all scientists down there,” she said. “It would be so cool to hang out with a bunch of scientists and speak science to each other.”

Freeman says a friend of hers has a 4-year-old daughter who brings home rocks.

“I said, ‘Don’t kill that. She obviously has a natural interest in it. You might as well cultivate that,’” Freeman said. “Cultivate these kids who want to be scientists. Science and math is where it’s at; if we don’t have that, our country is doomed.”