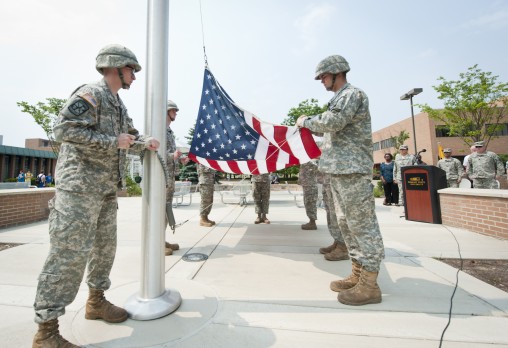 Wright State has been named "Military Friendly" for four consecutive years by both Military Advanced Education and G.I. Jobs.

Insights from decorated soldier and renowned psychologist Larry James, secrets of transitioning from soldiering to college to careers, and even a tug of war between cadets and veterans will highlight Wright State University’s Veterans Day celebration.

The event will be held Tuesday, Nov. 12, in the Student Union Atrium.

Nearly 900 people who have worn a military uniform study, teach or work at Wright State. The university is nationally known as a military friendly school and a top university for students interested in military service.

The keynote address, titled “The Cost of War,” will be given by James, Ph.D. — a professor, a retired colonel and 22-year military veteran, and associate vice president for military affairs at Wright State. He also served Wright State as dean of the School of Professional Psychology.

In additional to serving tours in Iraq, James was chairman of the psychology department at Walter Reed Army Medical Center. During the 9/11 terrorist attacks, he led teams of mental health professionals into the burning Pentagon.

“I have had the great privilege and honor of working with some of the best this nation has produced,” James said. “I knew people who were killed in the Pentagon. I’ve had soldiers die in my arms in combat. I’ve given three death notices in my career.”

James says Veterans Day reminds him of how lucky Americans are to live in this country. He says Wright State has created a welcoming environment for the nation’s veterans and benefits from their presence and contributions.

The Veterans Day event will also feature panel discussions and a presentation by the Quilts of Valor Foundation, an organization of volunteers who sew quilts for combat service members and veterans touched by war.

In front of Student Union