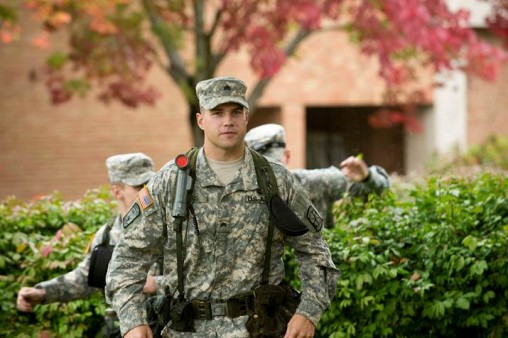 Aaron Jenkins is majoring in crime and justice studies at Wright State. He became interested in the field because it paralleled his job in the Coast Guard, where he was a maritime enforcement specialist.

This was recently a way of life for Aaron Jenkins, a junior ROTC student at Wright State who had been deployed to Cuba by the Coast Guard.

Jenkins was stationed in the courthouse at Guantanamo Bay, where he got an up-close view of detainees being processed and awaiting trial.

“It was pretty intense,” he recalled.

Today, Jenkins is majoring in crime and justice studies at Wright State. He became interested in the field because it paralleled his job in the Coast Guard, where he was a maritime enforcement specialist. 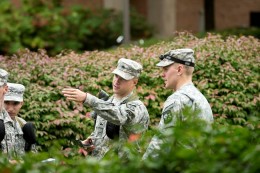 Jenkins grew up in Springfield, Ohio. In the summers, he would work on his relatives’ farms, baling hay, birthing cattle, showing animals at county fairs. In high school, he played football, ran track, did a little power lifting.

The Reserve Officers’ Training Corps (ROTC) is a college-based program to train students to become commissioned officers of the armed forces.

Jenkins says he enjoys ROTC, adding that it teaches responsibility, time management and communication skills. He says it is a lot of work, but that he would recommend it because it helps pay for school and can result in a commission and a career in the military.

“And anybody who is on the fence about whether the Army or any of the branches of service are right for them, ROTC is a great way to get a feel for what military life is like for up to two years without actually having to sign contracts,” he said.

Jenkins plans to make the Army his career, but after retirement would be interested in working as a U.S. marshal or with the Drug Enforcement Administration or U.S. Border Patrol.

Jenkins said his favorite ROTC experience so far has been parachuting out of planes during airborne school at Fort Benning, Ga.

“Jumping out of planes was something I always wanted to do,” he said. “But my plan is to fly helicopters, not jump out of planes.”