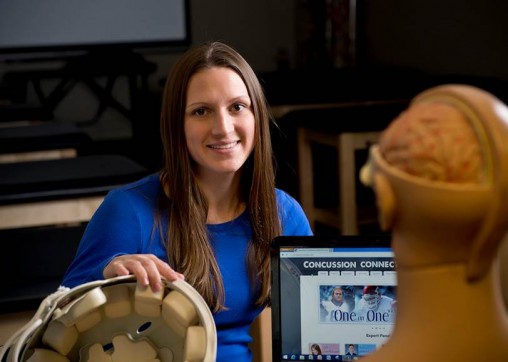 She was a rising star in the world of soccer. Playing on one of the nation’s best college soccer teams at the University of Miami, Samantha Sanderson had professional soccer in her sights.

Then came two blows to the temple on the field and a fall in which she crashed head first into a bench. Sixteen years of soccer that began at age 5 were over for Sanderson because of concussions—those dark, dangerous, traumatic brain injuries.

Today, concussions are still very much part of Sanderson’s life.

A graduate student at Wright State’s School of Professional Psychology, she has cofounded a popular website called Concussion Connection to educate and support victims of concussions. And she plans to make concussion treatment part of her career.

“We in no way, shape or form want to get rid of sports,” Sanderson said. “We want to make sure people understand that someone with a brain injury returning to play their sport may not speak up for themselves.”

The Centers for Disease Control estimates that as many as 3.8 million concussions occur each year in the United States. Among people 19 and younger, 250,000 were treated in emergency rooms for concussions and other sports- or recreation-related brain injuries in 2009, up from 150,000 in 2001, according to the Institute of Medicine. Last month, a federal judge in Philadelphia denied the preliminary approval of a $765 million settlement in the NFL concussion case, fearing that the sum may not be enough.

Soccer became a big part of Sanderson’s life when she was growing up in the Columbus, Ohio, suburb of Hilliard. Playing on a club team that traveled around the country and then making it to a national pool in the Olympic Development Program led to a full scholarship from Louisiana State University.

Following a coaching change at LSU, Sanderson transferred to the University of Miami her sophomore year, majoring in psychology and minoring in biology and sports science. She started as a junior and for the first time the team went to the Atlantic Coast Conference and NCAA tournaments. 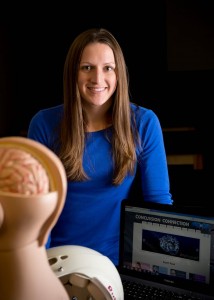 A neurologist diagnosed her with a concussion, vertigo and nystagmus, involuntary eye movement—often called “Dancing Eyes”—that can result in reduced or limited vision.

“My eyes would just shake back and forth,” she recalled. “But I started to get better and decided I was going to pretend I was OK.”

So she attended a team lifting session, felt her body give out and fell, striking her head on a bench in the training room. After meeting with her coach, Sanderson finally decided to declare a medical “career-ending injury.”

Meanwhile, her academics were suffering because of her symptoms. Her GPA fell from a 3.5 to 2.8.

“I couldn’t focus on anything,” she said. “My anxiety was pretty bad, so taking tests was a nightmare.”

Sanderson began undergoing biofeedback, a technique used to control the body’s responses by tracking brainwaves, pulse and other activities. That enabled her to gain a measure of control and helped her emotional state.

After graduating in 2009, Sanderson returned home to Ohio. When her headaches and other symptoms finally disappeared, she toyed with the idea of resuming her soccer career and planned to join a semiprofessional team in Los Angeles. But when she arrived at the airport in Columbus to leave, she changed her mind and went home.

The next day, she learned that she had been placed on the waiting list for admission to Wright State’s School of Professional Psychology. She was later accepted, but then suffered yet another concussion after her car was rear-ended by a semitrailer on Interstate 70 in Columbus. With headaches, vision problems and trouble concentrating, she spent the entire first year of her doctoral program recovering.

Desperate for help, Sanderson discovered a website called Life After the Game by Lauren Long, an Oklahoma City woman who stopped playing NAIA Division soccer after suffering concussions. Together, the two launched the Concussion Connection website in August.

“Our mission is to spread education and awareness about concussions and also provide support for athletes recovering from a concussion,” Sanderson said.

Concussion Connection includes information on concussions and symptoms, research reports and reviews of concussion-related documentaries/movies. There are personal accounts of concussion experiences with a comment/feedback section. A panel of experts—a sports medicine doctor, a sports psychologist, an athletics trainer and professional athlete—write blogs. And a chatroom that provides immediate response is in the works.

“One of the things we really stress is the mental health side of it,” Sanderson said. “Concussion recovery is multidisciplinary.”

In the first six months of existence, the website has had 20,000 visitors.

As part of her doctoral program, Sanderson created a poster for the Ohio Psychological Association on the Concussion Connection, drawing a lot of interest from doctors and winning best nonempirical poster. In March, she and Long will participate in the Youth Sports Safety Alliance Summit in Washington, D.C., to talk about concussions.

Following graduation, she would like to get an internship at a neuro-rehabilitation unit and then do post-doctoral work that is more sports related.

“My end goal is to be working with athletes with concussions, doing talks, spreading the word—awareness,” she said.