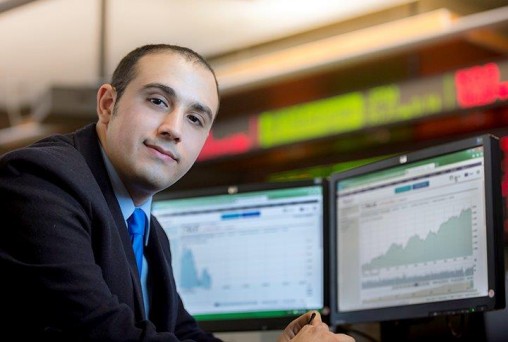 Fady Al-Banna is thriving as a student leader and finance major at Wright State, just a few years after his family fled his native Iraq.

As he began to pull out of the filling station in Baghdad that day, the university professor heard a man cry out and fall to the ground. Claiming to have been struck by the professor’s car, the man asked to be driven to a hospital.

Suddenly, the professor found himself in the car with the man and the man’s friend, who pulled out a gun and ordered the professor to drive along a route that had been the scene of many killings and abductions by insurgents in Iraq.

As the car approached a military checkpoint, the professor made a life-or-death decision. He slammed on the brakes, pulled the key from the ignition, jumped out the door and ran for his life toward the checkpoint. His abductors fled.

When the professor returned home to his family that day in 2007, it was decided it was time to leave their native Iraq, which had simply become too dangerous for them. So the professor, his wife and two sons—17-year-old Bashar and 16-year-old Fady—began a long journey that brought them to Dayton, Ohio.

Today, 23-year-old Fady Al-Banna is a senior at Wright State University majoring in finance and a student leader in international affairs. His older brother is at Wright State studying electrical engineering.

“What I like about Wright State is its diversity,” said Fady Al-Banna. “Students from different countries are being recruited to join Wright State. That’s beautiful.”

Fady was born in Baghdad in 1990, the son of parents who taught at the University of Baghdad. He remembers the happiness he felt in 2003 when invading American troops arrived in the city during the overthrow of Iraqi President Saddam Hussein.

“I was one of those kids who was standing in the street welcoming the U.S. soldiers coming to Iraq because I had a hope that these soldiers and these leaders would change the future of Iraq,” Al-Banna said.

But things got difficult for the Al-Banna family when thousands of radicals poured into Iraq and began targeting religious minorities and university professors, who the radicals feared could influence the political thinking of the population.

After the near kidnapping of Fady’s father in 2007, the Al-Bannas packed up their belongings and left Baghdad. But they had to drive through the city of Fallujah—which had been the site of a bloody battle between insurgents and U.S. forces.

Fady’s mother began praying and reciting psalms, including Psalm 23: “Yea, though I walk through the valley of the shadow of death, I will fear no evil: for thou art with me.”

Fady’s realization that it might be the last time he ever saw Iraq brought tears to his eyes.

The family made it through Fallujah and drove on to Syria, then to Beirut, Lebanon, where they moved in with Fady’s uncle.

In 2009, the family immigrated to the United States and settled in Dayton. Fady and his brother attended Sinclair Community College, where Fady started and served as president of Sinclair’s International Club and was a member of the National Society of Leadership and Success.

After transferring to Wright State in 2012, he was named director of international affairs for Student Government, breaking a promise to his mother not to seek a leadership position because she feared it would be too time-consuming.

Kyle Powell, vice president of Student Government, said Al-Banna has been a welcoming mentor to many students at Wright State.

“Since meeting Fady, I’ve not only gained knowledge about Iraq, but also how politics and government can change a person’s life,” Powell said. “Fady has been someone who you can talk to about anything and he respects your values.”

In addition, Al-Banna is a member of the Dean of Students Advisory Board at the Raj Soin College of Business.

Al-Banna says he also likes the strong academics at Wright State and the approachability of President David R. Hopkins and his concern for the students.

“He makes sure he reads his Twitter account from time to time to see what’s going on,” Al-Banna said. “I didn’t expect that.”

Al-Banna was a few minutes late for the interview for this article because he spotted a student at the Student Union in a wheelchair, took time to push him to Millett Hall for a meeting with his professor and then on to a lab at Rike Hall.

“We need to welcome and help disabled students and other students in need,” he said.

After college, Al-Banna hopes to work as a financial planner.

“I want to help people get more financially stable,” he said. “I want to influence people and make a difference in their lives.”