Wright State is once again tops at Model UN 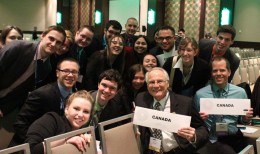 Joined by President David R. Hopkins, the team represented Canada’s foreign policy on 12 committees, with issues ranging from infant mortality to the prohibition of chemical weapons to the environment.

In addition, four Wright State students were voted best delegates in committee by their peers: Caitlyn Banis with the Commission on Narcotic Drugs; Jonathan Maze with the ECOSOC Plenary; Angie Loyd with the Peacebuilding Commission; and Andrea Jacoby with UNICEF.

“When war is raging in Syria and possibly Ukraine, when genocide is still occurring in Africa, when human trafficking persists, it is necessary to help young people learn the skills of listening, problem solving and cooperation. This is what the Model UN offers,” said Donna Schlagheck, Ph.D., chair of the Wright State Department of Political Science and Model UN faculty adviser.

This year’s conference was opened by United States Ambassador to the United Nations Samantha Power, an Irish-born American academic, author and diplomat.

Twenty-three Wright State students and their faculty advisers—Schlagheck and Vaughn Shannon, Ph.D., associate professor of political science—attended the March 29–April 4 conference, which drew more than 2,500 students from two dozen countries. The team is supported by the College of Liberal Arts and the Model UN Alumni Society.