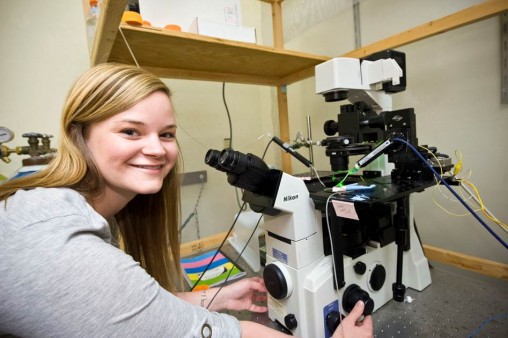 Graduate student Ellen Ricker investigates how opiates can affect the carotid bodies and stop a person from breathing.

A man with a limp. A woman in a wheelchair. These images of human frailty and courage fascinated Ellen Ricker when she was a young girl walking with her physician father on the streets of Toledo.

“I would ask my father, ‘What do you think is going on with him? What caused that? Was it an accident or was it genetic?’” Ricker recalled. “There was always that little part of me that wanted to know more.”

Ricker still wants to know more about the human body and has made great strides in that direction. In fact, she knows more than most anybody about a certain part of the anatomy—the carotid bodies.

Ricker, who is working on her master’s degree in anatomy at Wright State University, is a student neuroscience researcher investigating how opiates such as morphine can affect the carotid bodies and stop a person from breathing. 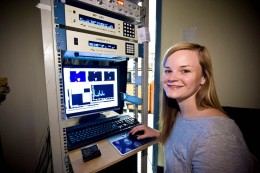 Ellen Ricker has garnered international recognition for her research and was named top female researcher in a STEM field at the Midwest Graduate Research Symposium.

More than a few people think so.

Not only will Ricker’s work be published, but one of her abstracts will be presented at a conference of the International Society of Arterial Chemoreception in the United Kingdom in July.

During the recent Midwest Graduate Research Symposium at the University of Toledo, Ricker won the Women in Science award as the top female researcher in a STEM field. And out of 75 oral presentations in chemistry, physics, pharmacology, law and other disciplines from graduate researchers around the nation, Ricker received second place. She also recently won a Wright State Graduate Student Excellence Award.

Ricker traces her interest in anatomy and body systems back to her studies in high school at St. Ursula Academy, an all-female Catholic college prep school in Toledo founded in 1854.

She obtained her bachelor’s degree in pre-physical therapy from the University of Dayton, during which time she spent a summer in South Africa volunteering at two clinics—helping chronically ill children with physiotherapy and educating women on how to care for abandoned children.

Ricker began working in the lab of Wright State associate professor Christopher Wyatt, Ph.D., in June 2013. Wyatt is working on the neural-control of breathing and how it can go wrong in Sudden Infant Death Syndrome and sleep apnea.

The main thrust of the research is how the body responds to reduced levels of oxygen, which is controlled in part by the carotid bodies.

The carotid bodies, a small cluster of chemoreceptors and supporting cells located near the fork of the carotid artery along both sides of the throat, detect changes in the composition of arterial blood.

“They were discovered to be involved in the control of breathing in the 1930s, and they still don’t know how they work,” said Wyatt.

“Prior to this, the cellular mechanism simply wasn’t known,” said Wyatt. “Now that we know what receptors are present, we may be able to use specific antagonists to stop the opiates from having their effect on the carotid bodies as well as in the brain. We can use more selective drugs with potentially fewer side effects.”

Most of Wyatt’s student researchers take a full year to complete their projects and gather enough data worthy of publication or presentation. Ricker did it in seven months.

“She passed through the lab very quickly; she worked very hard; she was very dedicated,” Wyatt said. “And her experiments worked and worked in such a way that we got coherent stories, which is always important.”

Ricker says she has been able to flourish in her research because of the excellent working environment at Wright State and the degree of independence she has been given.

“And you are always being pushed to do better and do the best that you can do,” she said.

After graduation in 2015, Ricker will likely either pursue a medical degree or one that will enable her to work as a physician assistant.

She firmly believes in the importance of research, saying it is critical in finding treatments for disease.

“These people in the labs in the basement of Wright State’s Medical Sciences building are working toward something bigger than themselves,” Ricker said. “It’s a really unique experience to be a part of.”