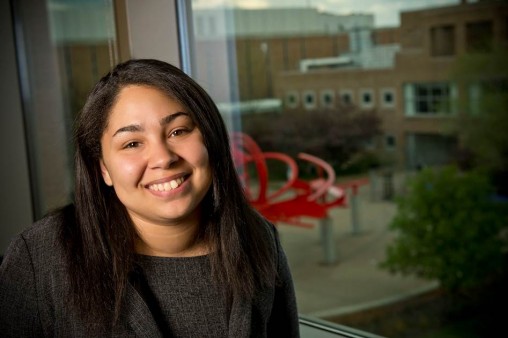 Wright State student Angie Loyd will spend the summer studying human rights in Europe and at Duke as a Ralph Bunche Fellow.

Her passport is tattooed with the stamps of South Korea, Japan and South Africa, with four European countries soon to add theirs. For Angie Loyd, a political science major at Wright State University, foreign travel for study abroad or with the Model UN team has become—well—a bit routine.

And Loyd’s stateside travels during her Wright State career would be a vacation highlight reel for many families—three trips to New York City and plans for a five-week stay at Duke University in the southern comfort of Durham, N.C.

Loyd’s college career has also been a highlight reel in and of itself. She carries a 3.7 GPA while holding down a job as a student assistant in the Office of the Vice President for Student Affairs. She has spent three years in the Model UN, co-leading a trip to Seoul, South Korea, and being voted among best delegates in committee at this year’s national conference in New York City.

Most recently, Loyd became only the second Wright State student to win a prestigious Ralph Bunche Fellowship, which carries a five-week session of graduate courses at Duke. Bunche, an African American political scientist and diplomat, received the 1950 Nobel Peace Prize for his mediation in Palestine. The Bunche Fellowships are designed to promote research on global affairs. 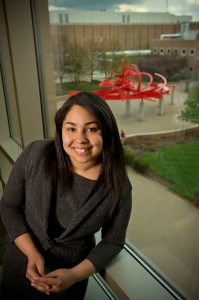 Angie Loyd's career goals include working with refugee women and children in societies emerging from conflicts that generated human-rights violations.

“I honestly did not think I was going to get it. I kept checking my email,” recalled Loyd. “When I did, it was out of this world. It is a great honor.”

She wants her selection to open the door for other Wright State students.

“I hope I can set a foundation to strengthen the relationship between Wright State and the Ralph Bunche Fellowship so that our name becomes something that is recurring for them,” she said.

Loyd has a smile that softens her clenched-teeth determination and commitment. She talks at a machine-gun clip, her words charged with enthusiasm and a kinetic energy.

She keeps a detailed to-do list to bring order to her crazy, busy life. And when she isn’t studying, reading or traveling, she likes to read—everything from Harry Potter and A Game of Thrones to Mein Kampf and The Communist Manifesto.

“I like to read different things to expand my knowledge and understanding,” she said.

Loyd’s mother immigrated from Germany to Dayton and got a job in the banking business to raise her two daughters. When a sour economy resulted in the loss of that job, she opened a daycare center in her home.

Angie attended Beavercreek High School, where she remembers being one of the few African American students and some awkward situations.

It was during a high school government class that Loyd fell into her passion for political science. The “aha” moment came when the teacher asked the class, “What is America?”

“Most people couldn’t answer that question; they were so confused,” Loyd recalled. “I knew exactly what America is. America is a place where you can make your own choice. And then I realized that the way you can make choices better for other people is through policy. That’s the way to change things.”

Loyd said the epiphany was an “adrenaline rush.”

“It’s almost like you have to figure out how to make things better without harming other people,” she said. “It’s a fine line that you walk because one thing changes another.”

When Loyd arrived at Wright State, she immediately joined the Model UN, an upper-level seminar class that culminates in a New York City conference similar to that of the United Nations in which students participate as delegates to various UN committees. The participants research and formulate political positions based on the actual policies of the countries they represent.

The experience gave Loyd insight into the perspectives of other governments and peoples, taught her how to be professional in confrontational situations, helped her develop her public-speaking skills and gave her an overall confidence in her abilities.

Loyd also immersed herself in other Wright State activities in order to weave herself into the fabric of the campus community. She was active in honor societies, took a wide variety of political science courses to forge relationships with professors, and even made a conscious effort to buy and wear Wright State T-shirts to be a campus cheerleader of sorts.

“Wright State has given me everything that I could ever want in college,” she said. “I am so glad to be here.”

While at Wright State, Loyd has been studying Arabic.

“It first became important to me because I thought it was a beautiful language and there is a lot of misunderstanding culturally between Americans and Middle Easterns who predominately speak Arabic,” she said. “Now I can talk to someone directly and understand and build that cultural approach.”

During her upcoming study-abroad program in Europe that focuses on human rights, Loyd intends to investigate discrimination against Muslims in France and the United Kingdom.

After she graduates in 2015, Loyd would like to go to graduate school to study political science or international affairs. Then she would like to work with refugees—especially refugee women and children in societies emerging from conflicts that generated human-rights violations.

Loyd said her Model UN and study-abroad experiences at Wright State were opportunities that have prepared her well for the future.