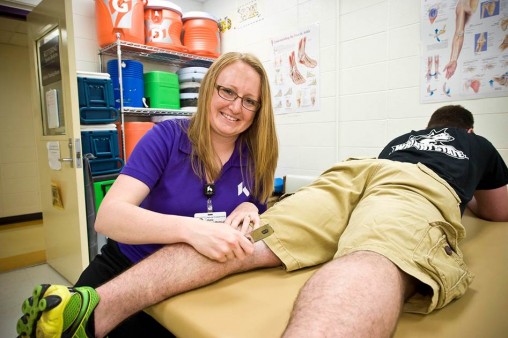 Katie LaRue-Martin, a Wright State grad and athletic trainer for Kettering Sports Medicine and Dayton Christian, was named the Ohio Athletic Trainer of the Year.

It’s pushing 3 p.m. on a Tuesday in the athletic training room at Dayton Christian High School. Brightly colored Gatorade containers are stacked on shelves. Posters of knee, ankle and shoulder joints are pinned to the walls. And an ice machine clatters away as it spits out cubes.

Katie LaRue-Martin is open for business. Over the next few hours, she will treat sprains, ice knees and stretch hamstrings.

LaRue-Martin obtained her bachelor’s degree in athletic training from Wright State in 2007 and her master’s degree in public health two years later.

She is an athletic trainer for Kettering Sports Medicine and Dayton Christian and is on the sidelines for football, soccer, baseball, softball and basketball games and for wrestling matches.

LaRue-Martin said being the first responder and the one to initially treat sports injuries is the most satisfying part of her job.

“You can evaluate their injury right there on the field and determine if there is anything you can do to get them right back out there or if you need to pull them and keep them safe,” she said. “I’m really passionate about making sure that my athletes are good to go later in life and not doing anything now that is going to be a hindrance to them later.”

LaRue-Martin said the toughest part of the job is managing all the different lines of communication—with the athletes, coaches, administrators, teachers and parents. And she acknowledges she sometimes gets pressured by athletes and others to let them play following an injury.

“The bottom line is that I’m contracted to be the medical provider when I’m out here,” she said. “If I don’t feel like it’s safe to go back in and play, or that you are not ready, or that we’re not following the best practice, too bad; it’s my call. You just do what you know is best for the athletes.”

LaRue-Martin grew up in the village of Richwood, about 35 miles northwest of Columbus. She graduated at the top of her class at North Union High School and was active in sports.

When she was a freshman, the school’s athletics director gave her a brochure on an athletic training summer camp sponsored by Wright State and the Kettering Health Network because he knew of her interest in biology and medicine. The camp led her to later enrolling in the university’s athletic training program.

Assigned as her preceptor and instrumental to her education was Tony Ortiz, who joined the Wright State staff as head athletic trainer in 1985 and transitioned to full-time faculty member in 2008. During his time as director of the athletic training academic program, enrollment swelled from six students to 80.

LaRue-Martin said Becky Bower, who is currently the interim program director, was also an important figure in her career.

“The faculty and the staff are one of the biggest strengths in the program,” LaRue-Martin said. “And we have such a large community of athletic trainers in southwest Ohio that students are able to go out and experience the high school and the clinical settings.”

When she was an athletic-training student, LaRue-Martin worked with Wright State’s women’s basketball and soccer teams. She also worked at Beavercreek High School and Wayne High School and did her internship at Columbus Academy. When she was a graduate assistant, she worked with Wright State’s men’s soccer team as well as the cheer and dance squads.

Wright State athletic-training students have interned with the NFL’s Baltimore Ravens, at Duke University and as far away as Alaska and Hawaii. One graduate was an athletic trainer for the U.S. luge team in four Olympics.

“They just show a commitment to the profession and go way beyond what’s expected of them,” he said. “And they play leadership roles.”

Ortiz said that of the roughly 300 students who have graduated from the Wright State program, LaRue-Martin is among the five smartest.

“She’s very sharp,” he said. “She could have gone to medical school.”